England’s reopening: ‘The world is looking at us with disbelief’ 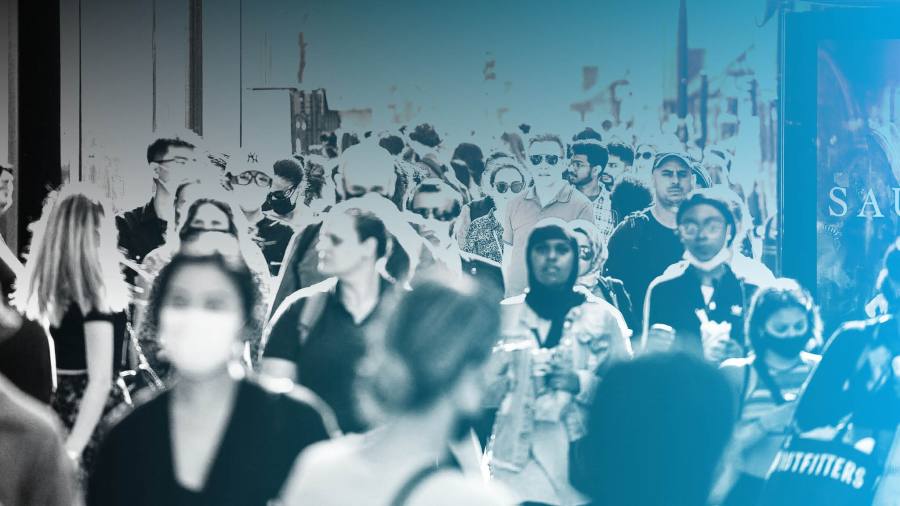 Realistic or reckless? Cases of coronavirus are doubling every 10 days in England and hospital admissions have risen more than 50 per cent in the past week alone. Yet with 65 per cent of the adult population double vaccinated against the virus the government is set to lift restrictions, from social distancing to mask wearing, in a bid to restore normality.

It would make England the first country to lift restrictions in the face of exponentially rising Covid-19 cases and the decision has divided the country with some scientists suggesting it threatens the health of many thousands of people.

Boris Johnson, the UK prime minister, and his new health secretary Sajid Javid argue that the next stage of the lifting of legal restrictions on July 19 can go ahead because the vaccination rollout has broken the link between infection, hospitalisation and deaths. Devolved governments in the other parts of the UK — Scotland, Wales and Northern Ireland — will make their own decisions on how soon to lift restrictions.

Yet many scientists and health experts have angrily challenged the government’s argument. “The world is looking at us with disbelief — a country with some of the best universities and minds acting with arrogance, yet again underestimating our adversary,” says Ravi Gupta, professor of clinical microbiology at Cambridge university.

That view is echoed by Isabella Eckerle, professor of virology at the University of Geneva. Eckerle is one of 122 scientists and doctors from the UK and overseas who signed a letter in The Lancet condemning the government’s “dangerous and premature reopening plans”. She says: “The decision can only serve as a warning negative example for other European countries.”

“Despite a seasonal benefit, infections are already on the rise with the new Delta variant in many countries,” Eckerle adds. “It is a dangerous and irresponsible situation to fully open now, and accept high infection rates in young age groups and especially children.”

With new cases running above 30,000 a day in the UK — 15 times higher than at the beginning of May — Javid said this week that the daily rate could rise to 100,000 this summer. Vaccination has cut the overall mortality rate from around 0.8 per cent last year to 0.1 per cent now but 100,000 cases are likely to cause around 3,000 hospital admissions and 100 deaths a day.

The proposed end of compulsory mask wearing on public transport and in crowded indoor spaces has attracted the strongest criticism. “It defies logic and it’s criminal frankly,” Gupta says. “There will be unnecessary deaths as a direct result of that.”

The risk of new variants

When Javid confirmed the plan to lift most restrictions on July 19 a cry of “hallelujah” went up from the Conservative benches in the House of Commons. Peter Bone, a veteran Conservative MP, says: “I wholly welcome this. It goes down the route of personal responsibility. It’s spot on.”

His response, and that of other politicians from the ruling Conservative party, exposed the growing polarisation in the UK over how to handle Covid in the coming months. The side advocating a quick end to legal restrictions, which includes many Tory MPs, espouses libertarian principles and calls for individual responsibility. They emphasise the social, educational and economic hardship caused by lockdown as well as collateral health damage such as mental illness and neglected attention to other diseases.

Those arguing that some restrictions need to be maintained, which includes many opposition Labour MPs, stress the state’s role in protecting society’s most vulnerable, while emphasising the direct health effects of Covid.

Many Conservative MPs share Johnson’s fear that if a full reopening does not happen this summer, when hospitals are under less seasonal pressure and schools are on summer holiday, then it might not happen until 2022. For Tory MPs in the lockdown-sceptic Covid Recovery Group, that was unacceptable.

Sir Keir Starmer, the Labour party leader, has tried to adopt a tone of “constructive criticism” of the government’s Covid strategy, knowing that the public has not wanted to hear political point-scoring at a time of national crisis. But he described this week’s move as “reckless”.

Advocates of maintaining legal restrictions point to two important implications of a rapid increase in infections beyond the headline figures for hospitalisations and deaths. One is the extra opportunities they provide for the virus to mutate; the other is the growing number of people who will suffer disability for many months or even years through “long Covid”.

Virologists such as Professor Richard Tedder of Imperial College London point to the emergence of new variants over the past six months, which transmit faster than the original Wuhan virus and can escape some of the protection given by current vaccines.

More infections increase the risk of even more dangerous variants evolving, Tedder says. “This view of the inherent danger in facilitating a very real increase of the infection rate is likely to be held by professional medical virologists across the UK.

“I would hope the health secretary will listen to this view,” he adds, “and involve those who have had decades of experience in medical virology.”

Fears around long Covid have been expressed even more widely. Common symptoms include fatigue, breathing problems, insomnia and “brain fog”, leaving many sufferers unable to work.

“Long Covid is a serious problem, with 10-20 per cent of people, including children, who catch the virus suffering illness, disability and psychological problems for months,” says clinical psychologist Julia Faulconbridge, “and that appears to have been completely neglected in [the government’s] announcement”.

Hundreds of thousands of people may be unable to work normally for months or even years as a result of long Covid, clinicians say — and the NHS is likely to be one of the worst affected employers.

“While the health minister spoke of wanting to avoid the mental health consequences of restrictions,” she adds, “he ignores the psychological consequences of allowing the infection rate to simply grow through the lack of society-wide mitigation measures.”

‘Little to be gained from delaying’

For now, hospitals have more immediate worries. Rising Covid cases — on top of a huge backlog of other commitments delayed by the pandemic — are already putting them under severe pressure.

“We are as stretched as we have ever been,” says Rachel Clarke, an NHS palliative care doctor. “Some accident and emergency departments are reporting more patients than ever before.” One hospital in Leeds had to cancel cancer operations this week on the day they were due to take place, she adds, because intensive care beds were occupied by Covid patients.

Although most scientists and doctors who have spoken publicly about Johnson’s unlocking have been critical, some are more sympathetic.

“On balance, I think there is now a reasonable case to move from restrictions to guidance,” says Raghib Ali, senior clinical research associate at Cambridge university’s MRC Epidemiology Unit. “We are now in the situation where admissions are less than a tenth of the peak and highly unlikely to reach levels seen previously given the very high vaccine uptake and effectiveness.

“There is little to be gained from delaying step 4 beyond July 19 as an exit wave [of infections] is inevitable in those who will not be vaccinated and there are some advantages of having this wave in the summer when schools are closed,” Ali adds.

Israel, widely seen as an exemplar for countries relaxing restrictions after a successful vaccination campaign, has reintroduced some restrictions — including mask wearing indoors and on public transport — as the highly transmissible Delta variant drives up infection rates.

Yet some Israeli experts, such as Eyal Leshem of the Sheba Medical Center, believes the country’s health ministry is being too cautious and called the approach in England “reasonable”. “Most of the adult at-risk population is protected,” Leshem says. “I assume the UK understands that lifting all restrictions will have a price. Some people will get sick . . . it will probably be [similar to] a very bad flu season.

“But then something interesting will happen: they will probably have a natural population-wide immunity,” he adds. “This is different from the current Israeli approach, running after every last child to get vaccinated.”

In the US many states moved faster than the UK, with some lifting Covid restrictions — including mask wearing — earlier this year. At the time, case numbers were not rising fast because the Delta variant had not yet made significant inroads into the American population. Now some states are seeing an alarming resurgence.

In Missouri, where just 45 per cent of people have received at least one vaccine dose, several hospitals have been forced to transfer patients to other facilities. “The state has been pretty much open since after the initial wave [in early 2020],” says Alexander Garza, pandemic task force commander for the St Louis region, who describes the combination of low vaccine uptake and lack of restrictions as akin to “the wild west”.

“We are going to see an increase in hospitalisations, the only question is how high does the curve go and how fast does it go,” he adds.

Prospects for England and the rest of the UK are similarly uncertain. Gupta predicts an “even steeper acceleration” in cases and hospital admissions as the “visible reminders of the pandemic [fall] away” after July 19.

“The government needs to be flexible in its approach and communicate effectively with the population,” he says, “but instead they have shut off the route to any kind of reversal or changes in direction.”

Steven Riley, professor of infectious disease dynamics at Imperial College London, is more optimistic. With schools closing and football’s European Championship tournament over by then, “the net effect of everything around [July 19] may not be a dramatic increase”, he says.

The political outlook is unclear too. Although Johnson has enjoyed a “vaccine bounce” since the start of 2021, two recent by-election defeats to the Liberal Democrats and Labour suggest it may be fading. A mishandling of the final lifting of England’s Covid restrictions could be politically costly.