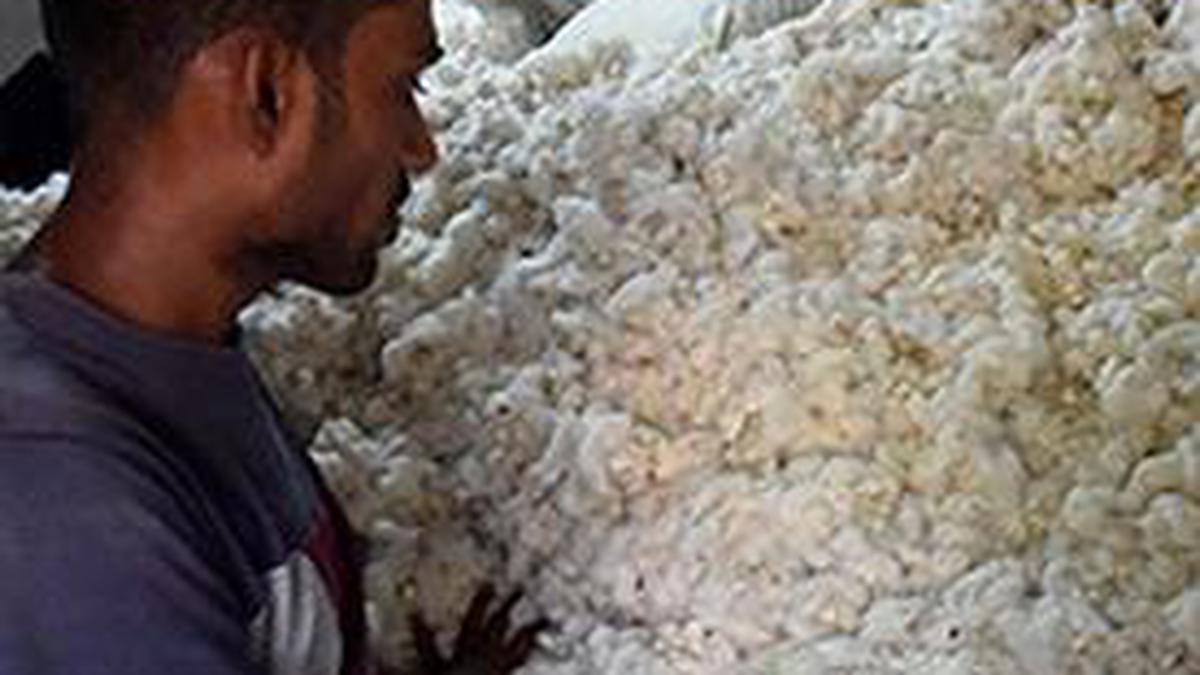 Demand for Indian cotton in the export market has re-emerged with domestic prices dropping to levels of ₹61,000 a candy and its premium to global market rates declining.

According to the Gujcot Trade Association, the price of Shankar-6 cotton, the benchmark for exports, on Wednesday (January 25) was ₹61,550 a candy (of 356 kg).

“Exports have resumed in small quantities after domestic cotton prices have dropped. We got demand from Bangladesh. As of now, looks like at current prices Bangladesh will be the only buyer,” said Ramanuj Das Boob, a sourcing agent for multinationals in Raichur, Karnataka.

Indian cotton is quoted at a premium as farmers are looking for better prices. As a result, demand from countries such as China is unlikely, he said.

“If prices fall further, farmers may not bring cotton to the market as it had happened earlier this season,” the sourcing agent said.

Currently, most of the trades in kapas (raw cotton) is being done at ₹7,500-8,200 a quintal across the country against the minimum support price of ₹6,080 for the current season.

“Premium to prices quoted on InterContinental Exchange (ICE), New York, has dropped to a little over 10 per cent from nearly 15 per cent earlier. This will revive demand for exports,” said Rajkot-based Anand Popat, a trader in cotton, yarn and cotton waste.

According to Popat, two lakh bales (170 kg each) have been shipped so far with prospects of shipments rising further. The Cotton Association of India (CAI), an association of the trade, has estimated exports at 30 lakh bales this season to September against 43 lakh bales last season. The US Department of Agriculture has pegged exports around 40 lakh bales.

“Demand for yarn has been resumed. Spinning mills have begun to buy as prices seem to be stabilizing,” he said.

Das Boob said spinning mills have begun to accumulate stocks and they could be building their inventory over the next 2-3 months.

Prabhu Dhamodharan, Convenor, Indian Texpreneurs Federation (ITF), said, “Price stability is more important for the value chain to deliver performance in this challenging global environment. We are of the opinion that prices will be in this range with small deviations based on the demand and supply.”

The market is unlikely to face much volatility during the current season to September due to “continuing challenges” on the demand front, he said.

With a few agencies such as the USDA and CAI revising cotton production figures, there are now questions over the actual crop size.

Going by the 340 lakh bales estimates, Ronak Chiripal, CEO, Nandan Terry Ltd, said, “The weakening of demand for cotton coupled with a surge in production will impact the current cotton price which will witness a decline in the near future.”

With Pakistan cotton production being affected by the worst floods it faced in July-August last year, some among the trade expect its textiles to face a problem particularly with the Islamabad facing forex crisis.

On the opportunities for Indian textile sector, Dhamodharan said, “At any given point in time, opportunities are available in developed markets due to China plus one opportunity. We need to gear up our efforts towards product and market diversification combined with continuous efforts on increasing competitiveness.”

But Chiripal said Pakistan’s economic crisis is unlikely to have any impact on India as the neighboring nation is importing cotton for manufacturing.