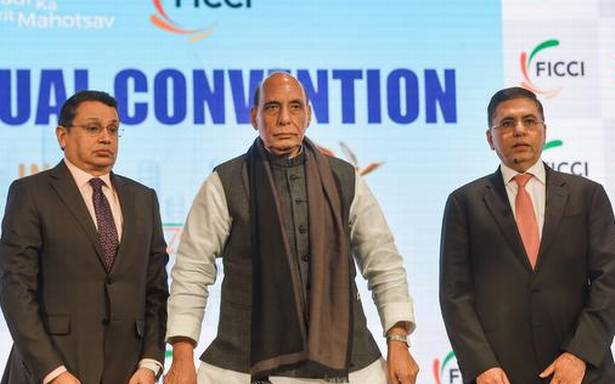 Indian Defense Minister Rajnath Singh said Saturday that India’s defense and aerospace industries sector, which is currently valued at Rs 85,000 crore, is expected to reach ₹1-lakh by next year and ₹5-lakh by 2047.

“Currently, the defense and aerospace manufacturing market in India is Rs 85,000 crore. I think in 2022, it will go up to Rs 1 crore. When I talk about ‘India Beyond 75’ I see that the defense and aerospace manufacturing market in India will be ₹5- lakh by 2047. The present contribution of private firms is Rs 18,000 crore in the market at Rs 85,000 crore.According to the present situation, there will be more than ₹1-lakh crore private sector contribution in the market for ₹5-lakh crore in the future, he pointed out.

Singh said that to realize its vision of making India a global industrial hub, the government has taken several measures, including an 18.75 per cent increase in defense capital expenditures in the latest budget. He added that 64 per cent of our total capital expenditure, which is around Rs 70,221 crore, has been reserved for local purchases.

Addressing the 94th Annual General Meeting of the Federation of Industry, FICCI on the theme of ‘India Beyond 75’, Singh emphasized the government’s vision of making India a global defense manufacturing hub in the times ahead, stressing that the focus is on modernizing the armed forces and creating a strong defense industry.” Atmanirbar can help protect the country from traditional, non-traditional, current and future security threats.

Singh stressed that future wars will be fought in the interconnected digital war zone through artificial intelligence, augmented reality and virtual reality, and urged educational institutions to focus on specialized courses in defense technologies to meet the demand of professionals who can transform future challenges into opportunities and enhance the country’s security framework.

Singh highlighted the recent visits of the defense ministers of the United States, Russia and France, adding that “countries around the world have friendly relations with us and we have told them that we would like to manufacture defense equipment in India because national security is our top priority.”

He also referred to the recent agreement with Russia, worth more than Rs 5,000 crore, to manufacture more than six AK-203 rifles at Amethyst, calling on each country to “Made in India, Made for India, Made for the World”.