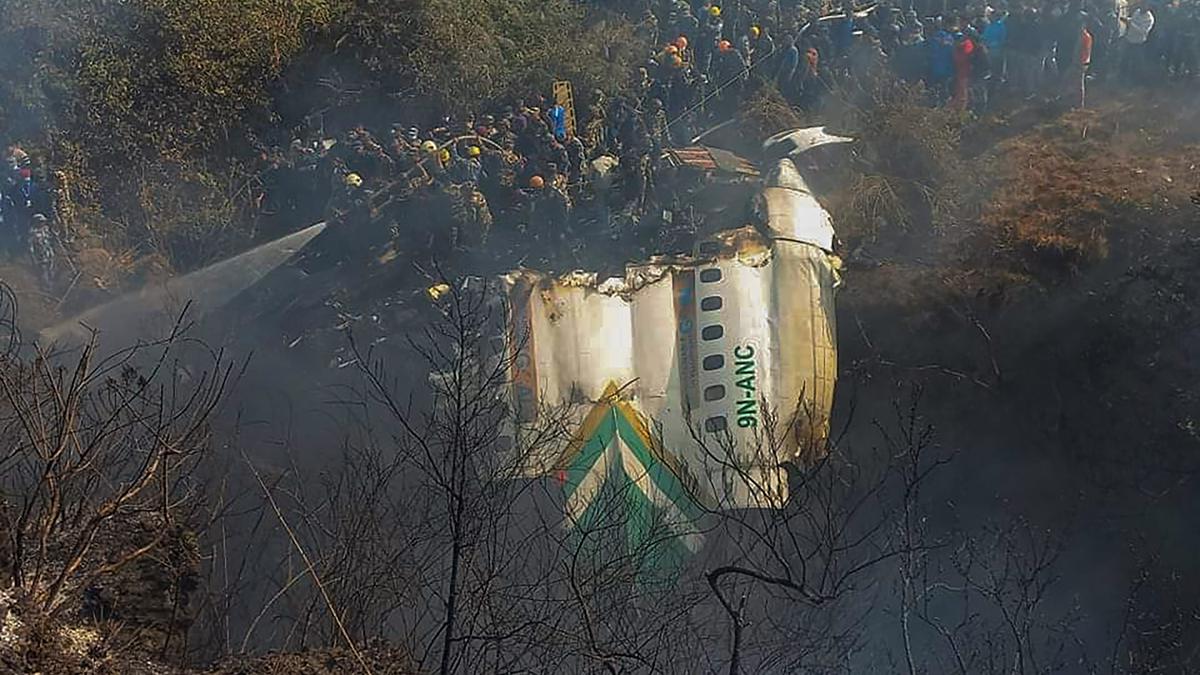 Mishandling, malfunctioning of an aircraft system or pilot fatigue could be among the factors that caused the deadly plane crash in Nepal that killed at least 68 people on Sunday, according to pilots and an aircraft accident investigation expert.

They also said the exact reasons that led to the accident will be known only after a detailed investigation.

Nepal, which has witnessed quite a few aircraft accidents in recent years, on Sunday witnessed the crash of an ATR-72 aircraft, operated by Yeti Airlines, that was flying from Kathmandu to Pokhara.

Going by the video clips on social media purportedly showing the plane’s trajectory seconds before it crashed, it was a clear sky and the weather was not bad.

An aircraft accident investigator said that going by one of the video clips, the nose of the aircraft went slightly up and the wings drooped to the left side before the crash occurred, and there could have been a stall.

While the exact factors for the crash will be known only after the completion of the detailed probe, at first it looks like the possibility of mishandling by the pilot or malfunctioning of the plane’s angle of attack system, he said on the condition of anonymity.

The person, who was involved in multiple aircraft accident probes, was also closely associated with the investigation into the Calicut plane crash in 2020.

A senior pilot at a leading Indian carrier, who did not wish to be quoted, said that following procedures are paramount when flying to terrains like that in Nepal.

The pilot, who also flies to Nepal, said multiple factors, including pilot fatigue, could have led to the crash.

While flying an aircraft, there is decision-making at every step and a pilot needs to have a good rest. So, there could have been pilot fatigue and also the possibility of procedures not being followed, the pilot added.

A pilot with a regional carrier, who has been flying ATR planes for nearly two decades, revealed that the particular aircraft could have suffered a stall or there could have been a pilot error. The factors that led to the crash will be clear only after the completion of the investigation, the pilot added.

The aircraft involved is a 15-year-old ATR 72-500 with registration number 9N-ANC and serial number 754. This aircraft was equipped with an old transponder with unreliable data. We are downloading high-resolution data and verifying the data quality. ,” flight tracking website, Flightradar24, said in a tweet.

The aircraft involved is a 15 year old ATR 72-500 with registration number 9N-ANC and serial number 754.

This aircraft was equipped with an old transponder with unreliable data. We are downloading high resolution data and verifying the data quality. pic.twitter.com/nnrpnnNnqj

At least 68 people were killed when the Nepalese passenger plane with 72 people on board, including five Indians, crashed into a river gorge while landing at the newly-opened airport in central Nepal’s resort city of Pokhara on Sunday.

The Civil Aviation Authority of Nepal said the aircraft was carrying 72 persons, including 4 crew members.