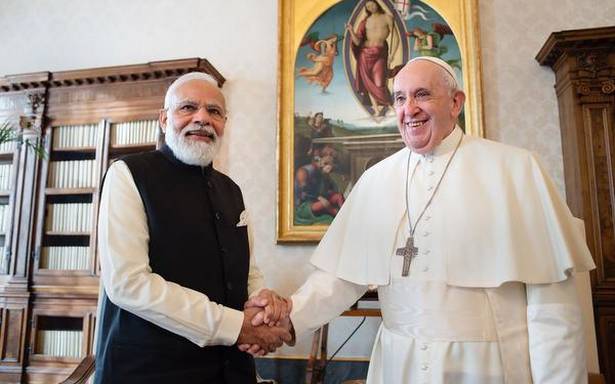 Prime Minister Narendra Modi met Pope Francis at the Vatican on Saturday and discussed issues such as the effects of the ongoing COVID-19 pandemic on people and the challenges posed by climate change, according to an official statement.

Modi, who was in Rome for the G20 summit from October 30-31, met his counterparts from Italy, France and the European Union and talked about post-pandemic economic recovery, mutual recognition of vaccine certification, promoting green energy initiatives and engagement – working to boost trade and investment.

Leaders of the G20 nations met for the first in-person summit since the pandemic, to discuss the global economy and global health, climate change, and sustainable development.

A source said Modi’s meeting with the Pope, which was scheduled for 20 minutes, spanned about an hour.

The Prime Minister briefed the Pope on the ambitious initiatives taken by India in combating climate change as well as India’s success in managing one billion doses of vaccination against COVID-19. His Holiness also appreciated India’s assistance to countries in need during the pandemic,” said the statement issued by the Ministry of External Affairs on Saturday.

She added that the Prime Minister extended an invitation to Pope Francis to visit India early, and it was accepted. This is the first meeting between an Indian prime minister and the Pope in more than two decades, the statement said.

“Glad to meet Prime Minister Mario Draghi in Rome. We talked about ways to strengthen the friendship between India and Italy. There is great potential for expanding economic ties and cultural cooperation and for us to work together for a greener planet,” Modi tweeted after the meeting.

The Prime Minister also met members of the Indian community and Friends of India from various organizations in Italy.