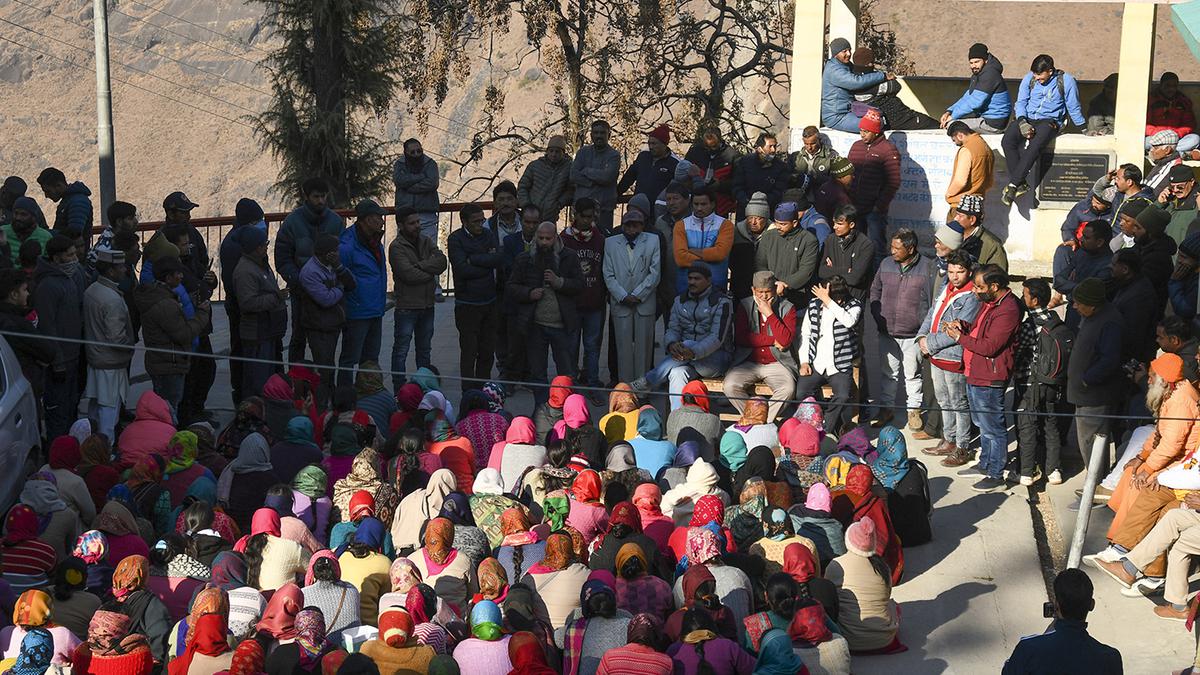 Relief and rescue efforts were intensified in Joshimath after it was declared a landslide and subsidence-hit zone, with the Center on Sunday stressing that the immediate priority is the safety of people and asking experts to prepare short and long-term plans for conservation and rehabilitation .

Officials said 13 more families living in houses with huge cracks were moved by the administration to safe locations on Sunday. The number of families evacuated to temporary relief centers now stands at 68, the Chamoli district disaster management office said.

The number of houses developing cracks in the town has risen from 561 to 610, Garhwal Commissioner Sushil Kumar told PTI.

Prime Minister Narendra Modi called Chief Minister Pushkar Singh Dhami and reviewed the situation, including the steps taken so far for the safety and rehabilitation of residents, and assured him of necessary assistance.

The Uttarakhand Chief Secretary has said state and district officials with the support of central experts have assessed the situation on the ground and informed that a strip of land around 350 meters in width is affected, the Prime Minister’s Office said on Sunday, after holding a high -level review meeting.

Central agencies and experts are assisting Uttarakhand to prepare plans to deal with the Joshimath situation and the immediate priority is the safety of the people, he said.

Affected families are being shifted to safe locations, a PMO statement said, noting that Prime Minister Modi is concerned and has taken stock of the situation with Chief Minister Dhami.

PK Mishra, the prime minister’s principal secretary who held the meeting, stressed that the immediate priority should be the safety of people living in the affected area and said the state government should establish a clear and continuous communication channel with the residents.

The Uttarakhand chief secretary briefed the PMO about the ground situation during the meeting, officials said.

Central government agencies and experts are assisting Uttarakhand to prepare short, medium and long-term plans to deal with the Joshimath situation, they added.

Immediate efforts should be made to arrest the deterioration in the situation through practical measures that may be feasible, Mishra said.

He said an interdisciplinary investigation of the affected area should be undertaken. Experts from a range of central institutions — NDMA, NIDM, Geological Survey of India, IIT Roorkee, Wadia Institute of Himalayan Geology, National Institute of Hydrology and Central Building Research Institute should work closely with Uttarakhand in the spirit of “Whole of Government” approach.

A clear time-bound reconstruction plan must be prepared and continuous seismic monitoring must be done, he said, adding that a risk-sensitive urban development plan for Joshimath should also be developed.

The review meeting was attended by the Cabinet Secretary, other senior officials of the Central Government and members of the NDMA, besides the Chief Secretary and the DGP of the state, through a video-conference. District officials of Joshimath also attended the meeting.

Experts from IIT Roorkee, the Geological Survey of India and the Wadia Institute of Himalayan Geology also participated.

Dhami had visited Joshimath on Saturday to assess the situation on the ground, a day after he directed the immediate evacuation of around 600 affected families.

Giving details of the relief and rescue efforts, Chamoli District Magistrate, Himanshu Khurana, said 229 rooms with a capacity to accommodate 1,271 people have been identified at different locations within the town.

Ration kits were distributed to affected families, besides an ex gratia of Rs 2.30 lakh among 46 of them, at the rate of Rs 5,000 per family for buying essential household items.

Uttarakhand Chief Secretary Sukhbir Singh Sandhu, during his visit to the town, made a similar appeal to people: “You should take no risks. The safety of residents is an immediate priority and the district administration is working continuously to ensure that.

Geological experts are exploring the causes of land subsistence. Based on their recommendations whatever treatment is needed will be done in Joshimath, the CS said.

Considering the extent of damage at least 82 more families will have to be evacuated to temporary relief centers as soon as possible, Garhwal Commissioner Sushil Kumar told PTI.

Kumar heads a committee tasked with monitoring the situation on the ground level and has been camping in Joshimath since Thursday.

There are a total of 4,500 buildings in Joshimath, out of which 610 have developed huge cracks and are unfit for habitation, he said, adding that a survey is still under way and the number of affected buildings might go up.

“Land subsidence has been going on slowly in Joshimath for quite some time but it has increased over the past one week with huge cracks appearing in houses, fields and roads,” the Garhwal Commissioner said.

“The situation apparently worsened after a water channel beneath the town erupted last week,” he said.

Chief Minister Dhami, who visited the affected areas in Joshimath on Saturday, held a meeting with officials in Dehradun on his return and asked them to relax the norms to expedite relief operations.

They were asked not to get entangled in long procedural complexes and take direct clearance from him for works related to treatment of drainage and sewage systems in Joshimath, he said.

The National Remote Sensing Centre, Hyderabad and the Indian Institute of Remote Sensing, Dehradun have been asked to conduct a study of the Joshimath area through satellite imagery and submit a detailed report with photographs.

A petition has been filed in the Delhi High Court seeking a direction to the Center to form a committee headed by a retired judge to look into the issue of sinking of Joshimath and rehabilitate the affected families.

Earlier, a seer had moved the Supreme Court seeking that the Joshimath crisis be declared a national disaster.

Experts have claimed that the land subsidence in Joshimath is primarily due to the National Thermal Power Corporation’s Tapovan Vishnugad Hydro Power Project and is a grave reminder that people are damaging the environment to an extent that is irreversible.