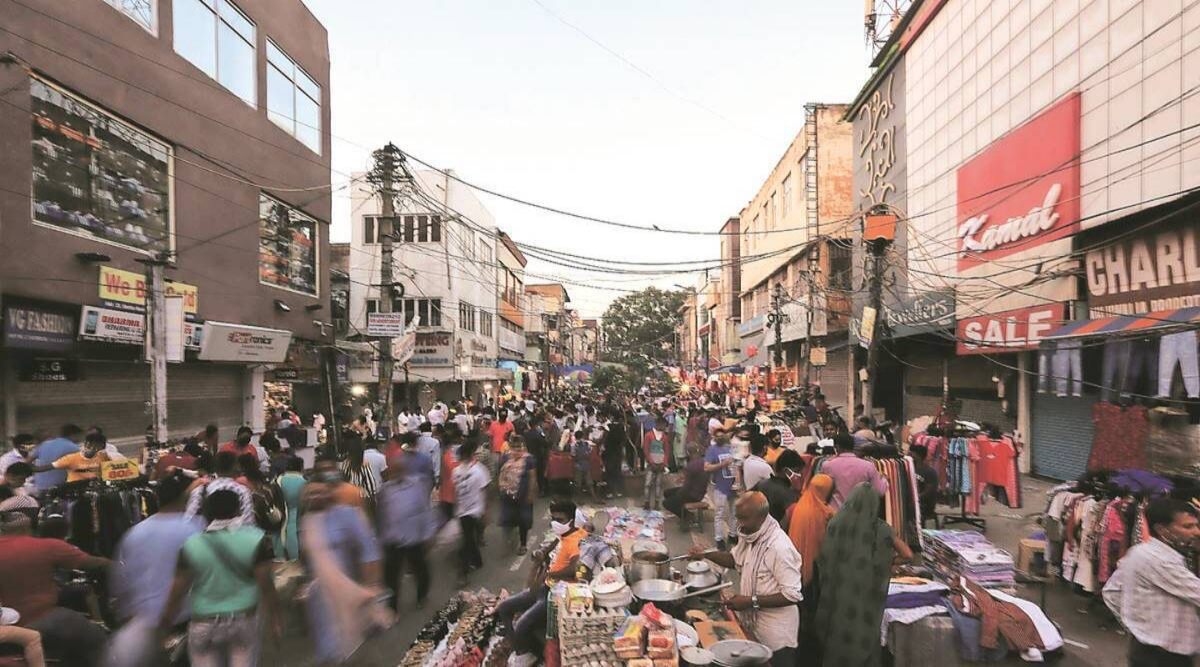 Merchants in Sarojini Nagar have been asked to stick social distancing circles outside and follow all Covid protocols inside their stores.

With the gradual spread of the Omicron variant of the coronavirus in the national capital, the effect of dwindling shoppers has not been lost on traders as they brace for the impending third wave of the pandemic. Twelve people tested positive for the Omicron variant in Delhi on Friday, bringing the number to 22, and officials said most of them were “fully vaccinated” and “asymptomatic”.

Sanjay Bhargava, chief of Chandni Chowk Vyapar Mandal, said they are “waiting and watching” for now, even as they asked the authorities to increase the police presence in the area. “We have verbally asked the authorities to increase the number of police in the area who can enforce the Covid protocol among those who come in casual contact with it. Street vendors and beggars mostly do not follow any such rules,” he told PTI.

While noting a “significant drop in footfall,” he said the market association would soon send out circulars to shopkeepers in the area to enforce Covid protocols. “We will soon be asking all our merchants to implement Covid protocols in their stores. In the past 10 days, there has been a clear drop in footfall in the market. Business is slowing down due to the increasing cases of Omicron in the city,” Bhargava added.

Atul Bhargava, Chairman of the National Traders Association of Delhi, said that although the risk of a crowded and crowded area is minimal in Connaught Place (CP), they have already sent out circulars to all traders. “We have asked them to strictly adhere to Covid protocols in stores such as sanitizing, insisting on wearing masks and taking the temperature of people arriving. As the CP is a large and open area, it is not a big deal. And with the police, people usually follow Covid protocols.

Delhi Health Minister Satyendar Jain on Thursday said that many international travelers have contracted COVID-19 upon their arrival at the Indira Gandhi International Airport here. On Tuesday, he said that the Omicron variant of the coronavirus has not yet spread in the community and that the situation is under control.

In light of the threat posed by the Omicron variant, the Delhi Health Department on Friday evening issued an order directing hospitals to increase human resources, including doctors, nurses, paramedics, sanitation and security personnel, under contract or through existing outsourcing agencies against job vacancies and an additional 25 percent of Sanctions force until March 31.

Merchants in Sarojini Nagar, another busy market area in South Delhi, have been asked to stick social distancing circles outside and follow all Covid protocols inside their stores. Ashok Randhawa, president of the Sarojini Nagar Mini Market Merchants Association, said they have sent out a leaflet asking shop assistants to get their second dose as soon as possible.

“Almost all of our merchants are fully vaccinated, who have not been asked to do so as quickly as possible. We have asked everyone to follow the Covid standards inside the shops,” Randawa told PTI. Although crowds are down 20-25 percent in the area, he added, people were rushing to shop now for the upcoming wedding season in case another closure was announced.

“Most buyers are the ones who want to finish shopping now. We are also worried about another closure because we are just starting to do business.” The official added that the association also asked the authorities to increase the number of civil defense volunteers and police personnel in the area.

“Shopkeepers can only manage people inside the stores, and there are hardly any police in the market. If people see the police, they wear their masks. And the authorities have to make sure the proper rules are followed.”