Will the Karnataka polls be a survival battle for the JD(S)? 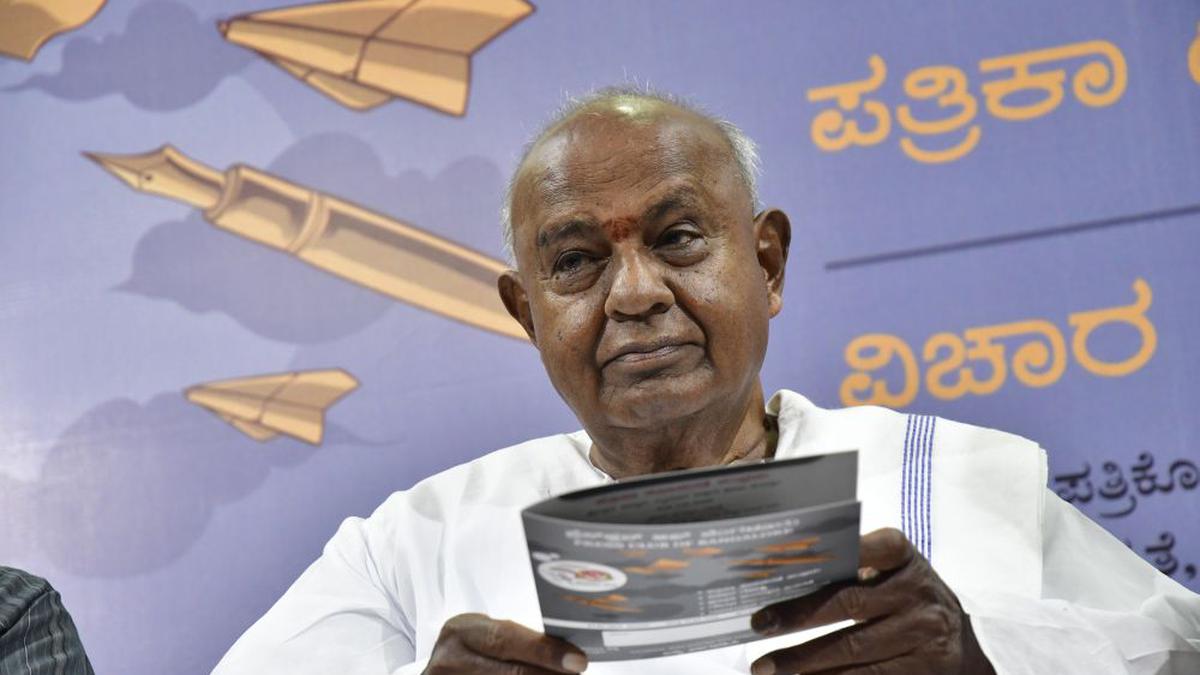 Will the 2023 Karnataka assembly polls be a battle of political survival for former Prime Minister HD Deve Gowda-led JD(S), or will the regional party once again emerge as a kingmaker, as it did in 2018, in the event of a hung verdict?

Plagued by desertions, internal rifts, and with the image of a “family party”, it remains to be seen how Gowda’s son and former Chief Minister HD Kumaraswamy, who is in a way single-handedly managing the JD(S)’ affairs with an aging father taking the back seat, would steer the party in the upcoming assembly polls.

Since the time of its formation in 1999, JD(S) has never formed a government on its own but had been in power twice in coalition with both national parties- for 20 months with BJP in February 2006 and with Congress for 14 months after the May 2018 assembly polls- with Kumaraswamy as the Chief Minister.

This time however, the party has set an ambitious target of “mission 123” to independently form a government on its own by winning at least 123 out of total 224 seats going for polls by May, and has been seeking votes repeatedly invoking regional Kannada pride. and asserting itself to be the only Kannada party.

There are however doubts among political observers and within a section of the party itself about JD(S) meeting this ambitious target, as the party’s best-ever performance so far has been in the 2004 assembly elections, when it won 58 seats, and 40 seats in 2013 was its second best. In the 2018 polls, JD(S) had managed to win 37 seats.

Some party leaders are hopeful about the JD(S)’ prospects of coming to power, by winning a few more seats than they did last time, and once again using the knack of power politics, by holding the key for government formation, in the event of a hung verdict.

“If such a situation arises we will certainly push for our Kumaranna (Kumaraswamy) to become the Chief Minister, but we will be more cautious on our choices and the bargain with the probable alliance partner this time after last time’s bad experience,” a JD (S) functionary not wanting to be named said, as he maintained that if not 123, the party will at least better its tally this time.

It is this Gowda family’s hold over the Vokkaliga community that dominates the Old Mysuru region comprising 61 seats (excluding the 28 constituencies in Bengaluru), which the ruling BJP and Congress are looking forward to breaking and improving their prospects.

The theme for this year is ‘Viksit Yuva Viksit Bharat’

Congress is considerably strong in Old Mysuru region and has been a traditional rival for the JD(S) in the belt, the BJP however is weak here and is aiming to make swift inroads with an aim to get a clear majority. Union Home Minister Amit Shah during his recent visit had asked his party leaders to concentrate on the region.

How strong is the JD(S)?

According to political analyst A Narayana from the Azim Premji University, how strong or weak the JD(S) actually is can be decided only after the candidates list is announced, because its survival depends on how many strong aspirants rejected by other parties join it.

“It decides two things- the percentage of votes JD(S) is going to poll and the number of seats they win. In constituencies where JD(S) doesn’t have strong candidates, they depend on rejects from other parties,” he said.

Further, he said that the question is also whether the JD(S) is stronger or weaker in their core area of ​​old Mysuru, when compared to 2018. It appears on the face of it that they are weak, for two reasons- one series of desertions since 2018, the second Congress is in a better position among the Vokkaligas; One of the factors for it is DK Shivakumar (a Vokkaliga) as President.

“Also in the 2018 elections, JD(S) won in Mandya and Hassan districts, only because of Vokkaliga anger against Siddaramaiah, and that seems to have not disappeared now but subsided,” he said, adding that how the BJP making inroads in Old Mysuru region will affect the JD(S) or Congress, is the question that cannot be answered at the moment.

Political observers are also of the view that the perception about JD(S) being too family centric is one of its major drawbacks. Eight members of Gowda’s immediate family are active in politics.

Gowda, who is the JD(S) supremo, is also a member of Rajya Sabha from Karnataka, while his son Kumaraswamy is a former CM and MLA from Channapatna. Kumaraswamy’s wife Anitha is MLA from Ramanagara segment, and his son Nikhil, who is the JD(S) youth wing President, had unsuccessfully contested the 2019 Lok Sabha polls from Mandya.

The party supremo’s elder son HD Revanna is a former minister and MLA from Holenarsipura, his wife Bhavani Revanna was a member of the Hassan Zilla Panchayat, and their sons Prajwal and Suraj are MP from Hassan and a MLC respectively.

James Manor, University of London professor, who has been a keen observer of Karnataka’s politics, during a recent webinar said, family-centred politics is causing discontent and leading to desertion. “JD(S) suffers from over-centralisation and dictatorial leadership.”

Narayana too echoing similar sentiments said, the party is perceived to be “over family-centric”, even among Vokkaligas, leading to leaders deserting the party. “It was also one of the primary reasons for JD(S)’ rout in 2019 Lok Sabha polls, which was its lowest point ever since the party’s formation.” According to some political observers, JD(S)’s inability to grow beyond the Vokkaliga-dominated old Mysuru region, other than in certain select pockets of northern Karnataka is seen among its other drawbacks.

Kumaraswamy on Saturday however exuded confidence that his party will grow beyond its traditional old Mysuru region in the upcoming assembly polls and form a government on its own strength in Karnataka. He also claimed that there is a strong undercurrent in favor of him and his party, especially in rural areas. Narayana further pointed out that Vokkaliga’s support for JD(S) has not been consistent.

Of all the caste groups in Karnataka, I would say that Vokkaligas are more matured voters…In one election they will support Deve Gowda and when they perceive that his government or party has not done well or have disappointed them, they don’t t hesitated in shifting to Congress. This has happened consistently.” Amid questions of the party’s survival and “shortage” of active leaders, Kumaraswamy is on a “Pancharatna Ratha Yatre”, a statewide tour that he is undertaking ahead of polls. This Yatre is to inform people about a five-fold program called ‘Pancharatna’ that the JD(S) plans to implement on coming to power, which includes quality education, farmer welfare and employment.

He has already announced a list of 93 candidates for the assembly polls, and will announce the second list of 50-60 candidates in about 10 days. “I want to give the opportunity to fresh faces…want to build a second line of leadership in the party,” he has said.

JD(S) believes it damage suffered in 2018 polls, when the Congress repeatedly called it the BJP’s ‘B’ team, which resulted in Muslim votes going away. The party’s decision to bring CM Ibrahim as its state president might be a step towards regaining minority votes.

However, noting that any such impact would be marginal, Narayana said, as there is a growing sense of insecurity among Muslims this time they may go for strategic voting in which they may completely vote in favor of a party or in favor of the candidate, who is most likely to win against BJP in their segment.

Whatever said and done, one needs to be careful before writing off the JD(S), as before every election since 2008, discussions have always taken place in media and political circles, about it being a battle of survival for the regional party, but it has continued to remain a relevant force, according to political analysts.

Pointing out that this is seen by some quarters as Deve Gowda’s last election, Manor had recently said, “His emotional pleas for votes may attract more support from Vokkaligas than that of Shivakumar’s.

Also, some Vokkaligas resent Siddaramaiah’s emphasis on minorities, backward classes and Dalits. Perhaps, the JD(S) may not do too badly, and if it does even somewhat well, it will be bad news for the Congress.