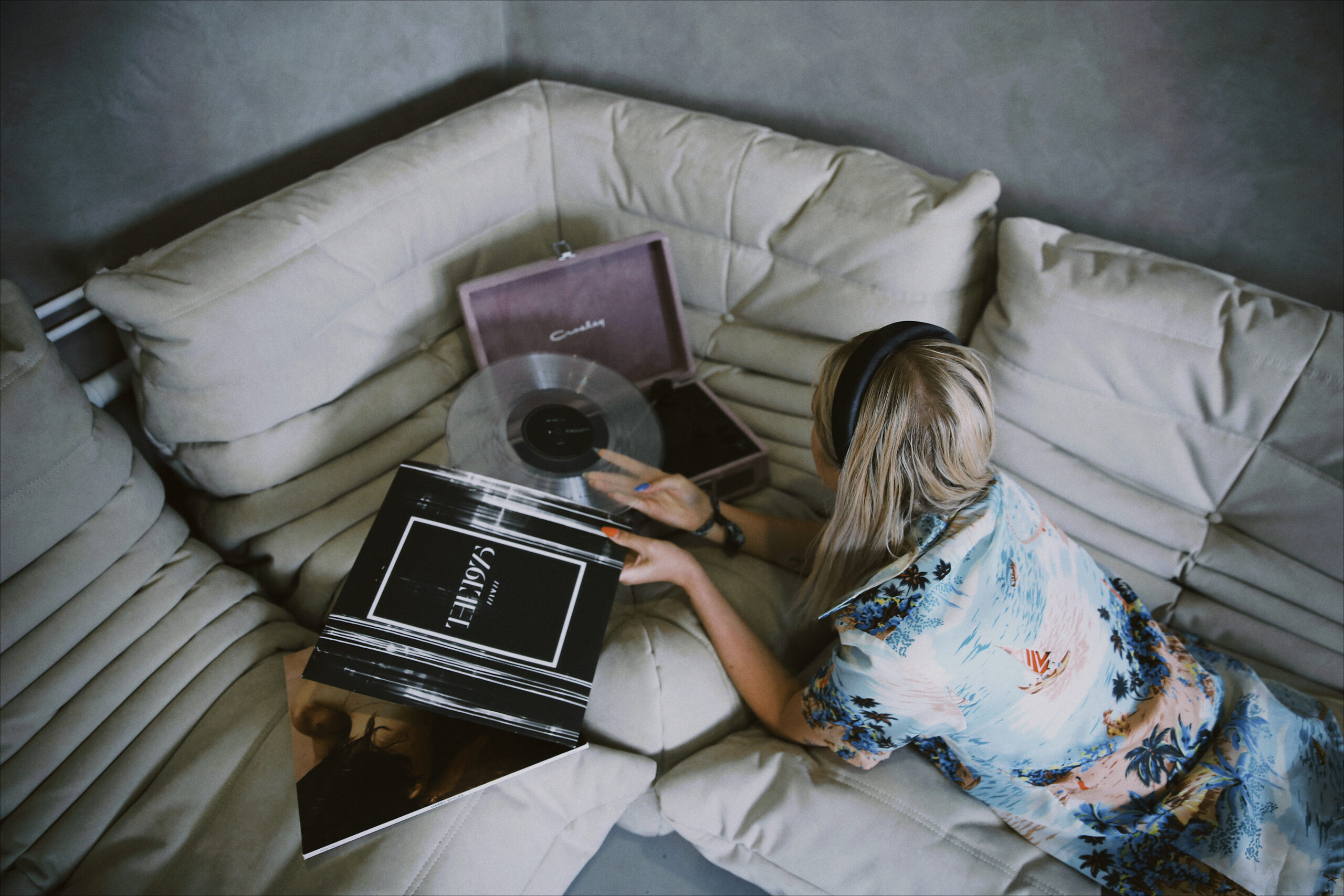 The humble gallery wall has had homeowners in a chokehold ever since it first emerged as a trend, filling blank walls and adding a new dimension to living rooms and bedrooms nationwide. But according to interior designers, the trend is on the way out. Nobody panic…

If you’re seeking a new way to add a little bit of *spice* to your white walls, look no further than the ultimate music lovers’ obsession- the vinyl wall. The brainchild of Emily Jane Lathan, 70s design lover and DIY queen, the vinyl wall not only allows you to display your most prized records, but also switch up your album arrangement regularly to showcase your current ‘now playing’ list. Genius.

If you’re looking for some seriously stunning album artwork to grace your very own vinyl wall or add some new music to your weekly listening rotation, may we present 12 vinyl covers so pretty they’re basically works of art.

With its dreamy hues of coral and blue, this cover captures the feeling of hazy, hot summer days with its subtle blur and high saturation edit. Released in 2018, the 13-track album is Kacey’s fourth studio album and is an eclectic, mesmerizing mix of disco, electropop, electronica, and yacht rock (a broad music style and aesthetic commonly associated with soft rock, one of the most commercially successful genres from the mid-1970s to the mid-1980s, FYI).

Musgraves’ sister Kelly Christine Sutton actually took the cover photo for Golden Hour over a two-day photo shoot in and around their hometown of Golden, Texas- how cute!

For those who love a pop of color within their interiors or are a sucker for the summer season, this album cover is one for you to display in pride of place.

The queen of dreamy lyricism, Ms Swift’s 2020 lockdown release, Folklore, is the collection of mellow ballads created with escapism, romanticism, and nostalgia at the forefront of their conception. Taylor described the album as a “collection of songs and stories that flowed like a stream of consciousness”, and we’re beyond honored to have stepped into this world with her.

The album artwork shows Taylor walking through a deserted forest scene, surrounded by towering, shadowy trees and beautifully capturing the ruminative and isolating feelings so many of us came up against during the height of the pandemic. Listed byVogue As amongst the best moments of lockdown culture, we can’t help but agree.

Add to your display if a monochrome or muted color palette is your thing, and put this record on in times when introspection comes calling.

Minimalists, the muted color scheme of this EP cover has your name written all over it. The ultra-textured design shows Role Model, aka Tucker Pillsbury, appearing to cut away a pair of angel wings, with the addition of retro calligraphy finishing off the simple yet striking design. Released in October 2020, the 6 track EP features hit songs ‘blind’ and ‘for the people in the back’ and feels authentically relatable at its core. Exploring themes of mental health, sex, and heartbreak, this addictive and distinctive collection of ‘bedroom pop’ hits is delightfully moreish.

Neutral interiors lovers, this one’s for your record stack.

Arguably the hottest record of the year, Harry’s House from our friend Harry Styles is a 13 track release of pure good vibes ONLY (except Matilda, to which we cry). The introspective and charming album ticks every box you could hope for, both in listening on your daily commute or watching him perform at the highly anticipated European leg of Love On Tour which began in June of this year.

The nostalgic, soft-in-color album cover shows Harry in a living room setting, minimally furnished with an orange sofa, yellow table lamp, vase of flowers and arch door that has since become synonymous with the album campaign. Lovers of retro, warm-toned interiors should pay attention here, as furniture brands including Made.com noted a major uptake in interest for similar pieces. Perfect for weekdays working and Sunday morning listening alike, this album is one to display for anyone fond of 70s nostalgia and grand millennial aesthetics

“For those who don’t know, it is my butt kinda from below,” New Zealand singer-songwriter Lorde told Stephen Colbert on The Late Show last year- “It’s a little hardcore, but it was so joyful to me. It felt innocent and playful and a little bit feral and sexy,” said the 25-year-old star when describing the cover of her latest, psychedelic pop and indie-folk album, Solar Power.

“My friend just took it. It was just me jumping over a friend on the beach. The album is a celebration of the natural world, an attempt at immortalising the deep, transcendent feelings I have when I’m outdoors,” she continued. “In times of heartache, grief, deep love, or confusion, I look to the natural world for answers. I’ve learned to breathe out, and tune in. This is what came through.” We love it!

Whilst the cover might be apparently too racy to show on national TV, the dreamy blue sky background, contrasting yellow font and blurred movement feels more innocently like the capturing of a playful and carefree moment- the stuff of core memories!

Perfect to display during the summer months, the Solar Power cover will have you itching to spend time in the sun, stat.

The second studio album from Danish singer and songwriter MØ, Forever Neverland was released in October 2018 and is said to be “dedicated to the quest for eternal youth”.

The simple yet dreamlike album artwork feels like it’s been plucked straight out of the 80s, with its indigo backdrop and contrasting pink graphic eye make-up, the vibes are all out captivating.

“We see MØ cast through a prism, splitting into different colours. She’s done with California. She’s heartbroken,” note Pitchfork, and despite the peppy album cover, upon listening the complex combination of emotions that are explored in the 14-track album somehow seep through.

Add to your vinyl wall or record stack if romantic, whimsical and dreamlike imagery is your jam.

The Rolling Stones – Let It Bleed

An oldie but goldie, Let It Bleed by The Rolling Stones is considered iconic in the world of album art for a reason. The 1969 cover shows a cake created with layers including a tire, clock face, film canister, and a pizza, clad in white frosting and little Rolling Stones figurines, with a cracked Rolling Stones album playing below. Pretty wild.

Despite the cover artwork originally being created with the working title Automatic Changerit stood the test of time when the record was complete and was among ten album covers chosen by Royal Mail for a set of “Classic Album Cover” postage stamps issued in January 2010.

Retro and playful at its core, add it to your vinyl display if you’re a fan of the classics!

The seventh studio album from British band Metronomy, Small World was released in February 2022 is described by the band as “a return to simple pleasures, nature, and an embracing, in part, of more pared-down, songwriterly sonics.”

The cover is a beautiful reflection of this, with the image showing an idyllic pond and forest scene that’s channelling goblincore to the max. For those with darker interiors, this enchanting cover was made to be displayed in your home.

The limited-edition tenth-anniversary reissue of Bon Iver’s Grammy Award-winning sophomore album Bon Iver is a work of art if we ever did see one. Featuring all ten original tracks, plus four very special renditions from the band’s 2012 AIR Studios 4AD/Jagjaguwar session, the reissue features a blind embossed version of the original cover, and is a minimalist lover’s dream.

Subtle yet striking, add this to your lust list if diving into the sprawling and magical world of Bon Iver is top of your to-do list.

Dropping in 2018, Love Me / Love Me Not is the second album by English electronic music duo HONNE and features 12 tracks that “half explore the euphoria of falling in love, and the other the agony of falling out of it. It’s a careful, calculated unraveling of modern romance. It’s almost surgical in its strategy” say DIY.

The album cover is strikingly beautiful, and will no doubt stand out amongst your vinyl collection as a bold design that celebrates symmetry, block color and a retro inspired color palette that would look right at home in the 80s. Add this vinyl to your collection if you’re looking to inspire conversation.

Iconic – the most appropriate word to describe Vampire Weekend’s debut album by the same title released all the way back in 2008, which was ranked the 5th best album of the year by TIME, before going on to secure a spot in Rolling Stone’s 500 Greatest Albums of All Time in 2012.

The album’s cover is a sepia image of a chandelier from St. Anthony Hall at Columbia University, and is an actual Polaroid picture from one of the band’s early shows at the university. The album’s unique hybrid of indie pop, chamber music and Afropop influences make it a striking and memorable debut album, with the chandelier upon its cover becoming so synonymous with the band that their early stage design would be adorned with chandeliers hanging from the ceiling at their gigs.

Add this vinyl to your display if you’re seeking 100+ indie points.

If you haven’t fantasised about being adopted as the fourth Haim sister, then you’re doing it wrong. The 2020 release of their third studio album Women in Music is arguably this Californian trio at their best, receiving widespread critical acclaim thanks to its experimentation across genres and vulnerable to lyricism.

The album cover was shot by Paul Thomas Anderson at Canter’s Deli, a Jewish-style delicatessen in iconic Los Angeles, which has been a late-night hang out in Hollywood since it opened in the 60s, and where the trio played a gig during their early career. Anderson has collaborated with the girls numerous times throughout the years, directing multiple music videos for the band, including The Steps, the first single from WIM.

Powerful and captivating, add this vinyl to your display if bad b*tch energy is your jam!