Behind the Magic of the Costume: We Spoke to a Real Life Mickey Mouse… 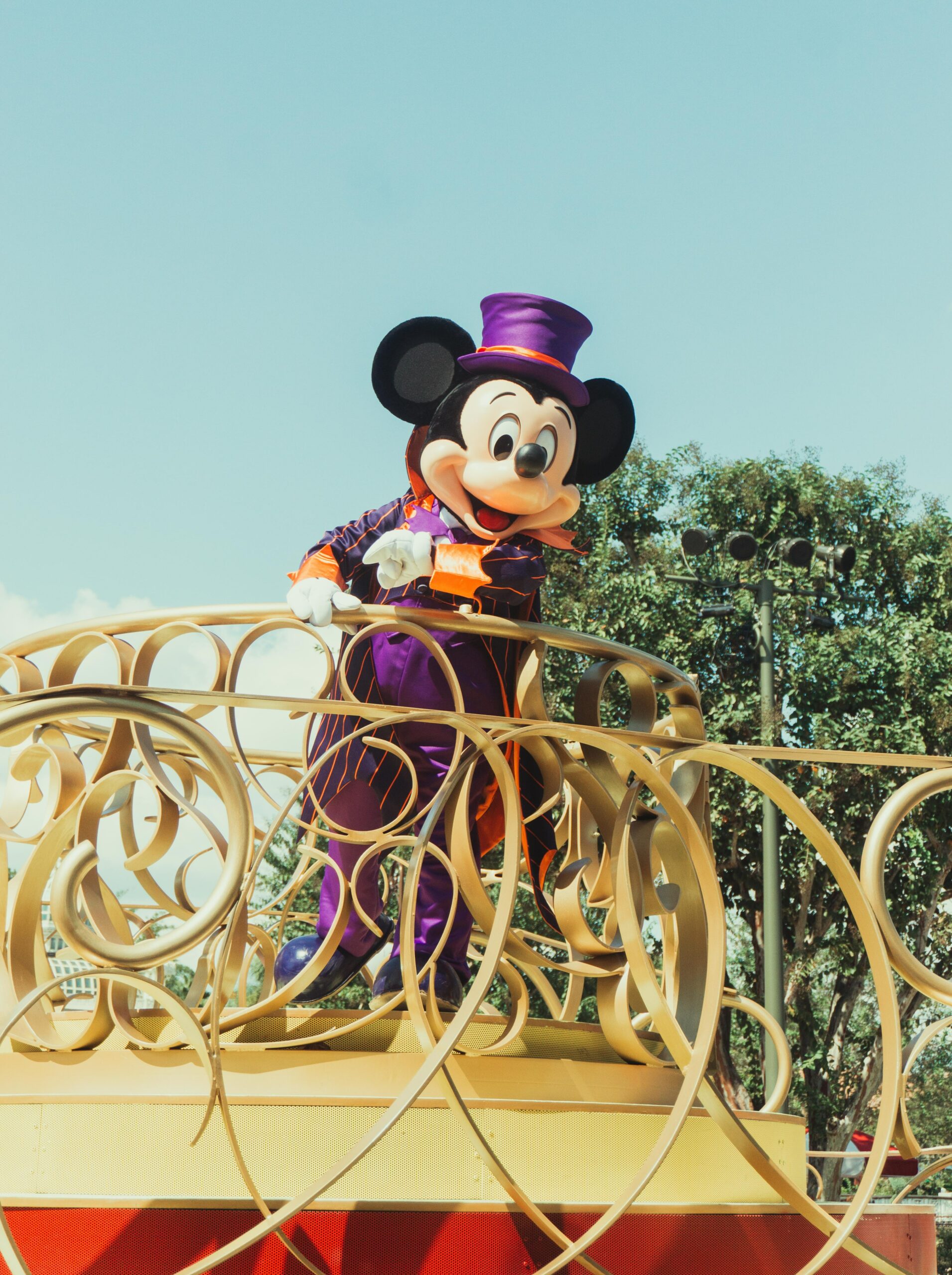 Ever wondered what it’s really like playing Mickey Mouse or Donald Duck at Disneyland? We spoke to an anonymous former fur character to find out!

From the intense audition process to the emotional reactions from parents and children and the reality of life behind the giant fuzzy costume, here’s what a once-upon-a-time Mickey Mouse had to say about their time in the parks.

Q: Which character did you play and which Disney were you located in?

I worked at Disneyland Paris for a year and was friends with a whole variety of characters! (Translation: being friends with a character is Disney speak for portraying a character). These included Mickey and Minnie Mouse, Donald Duck, Timon, Stitch, Winnie the Pooh, and Piglet – these were the main ones, however, you used to get trained to be friends with additional characters if they needed them for special events or occasions. For example, Thumper used to meet during the Christmas season so you would have an afternoon of training to add him to your pack!

So, you attend an audition, which is usually held in London or Leeds. Once you enter you get measured – this then determines what characters you can be friends with. Everyone does an animation round which is a lot of improvising as different characters to show that you actually can act! People are then cut and a dance round begins. You’re taught a short piece of choreography that is still character-based so then you can show your dance skills whilst still portraying a character. After this, you’re then split up into two groups, those who can be friends with the characters and dance on parade and those who are only sticking to character sets – this is decided by how well you scored in the rounds.

People are then called up who potentially could be friends with face characters (princesses/villains) and are closely inspected and asked for any additional information like visible tattoos. If they’re successful they then go to another room for fittings to see if they’re able to be friends with the characters in mind.

Everyone else signs forms to say when their availability is and if there’s anything people should be aware of like asthma or being claustrophobic.

Q: Do you need to do a character study or go to Disney School?

Once you arrive you do a class called Traditions, this is where you learn about the Walt Disney Company and all about the parks. You then do a week of training which includes all the information you need to know about working there. You also do animation training and learn your friends’ autographs – need to see if you actually have eligible writing and can make your handwriting look different! After the week, you then are given a friend and you head out into the parks to see if your training has paid off – if not, you’re then sent home.

Q: What are the physical requirements for the role?

Face character roles revolve around your height and your look massively – after all, you are having to portray some of the most loved characters out there and children aren’t afraid to point things out! There’s such a wide height range between all the characters though so there is something for everyone.

Q: How did you deal with the pressure to maintain the ‘Disney look’ you’re hired for?

It differs between parks with this one. Some parks are ok with you having non-visible tattoos but other parks will give you a straight-up no and the same with colored hair! It’s all changing a bit now as well with the Walt Disney Company bringing inclusion as one of their keys (they call their brand values ​​’keys’) so some of the Cast Members, especially in the States are truly portraying this now – a friend of mine met a male Cast Member on her recent holiday who was wearing glittery eyeshadow which I just LOVE!

Q: What experience do you need to land the part?

A lot of the Cast Members have had either acting, dance, or musical theater training and that’s how they’re so quick on their feet with improvisation and are able to dance on the parades. However, a few people I knew just went to an audition on a whim and were naturally good at improvising so got the role!

I’d say that improvisation is the biggest part though. You have to be so quick on your feet to think of your next move – pointing out people who have your characters’ faces on or dancing with little children. It’s important that each guest has a different interaction as they can all see you in the queue so you want to interact with them in a way that’s special to them!

Q: Is it true that you have to fit into costumes that already exist?

Yup! Your friend’s costume is shared by the whoooole company so if you don’t fit (even when you’re already backstage!) then sorry, it’s time to pack your bags.

Q: How long does it take to get into character before a shift?

This varies between your role. If you were friends with fur characters, you’d usually come in with your hair ready and bare-faced, find out your allocation shift and then get your stuff together – they allow you 30 minutes prep for this type of shift before your taxi comes and gets you.

If you’re friends with face characters, you’re given extra time because of having to sort out cosmetics etc. & before the parade everyone who is on has a run-through at a certain time of their routine a) so they know you can do it and b) so they know you still look good doing it.

Singers in the shows will do warm-ups to help them prepare as they tend to do multiple shows per day.

Q: Is there a certain amount of guest targets characters need to hit?

Nope! You’re on set for 30 minutes and the goal is to just keep getting the queue down whilst giving the guests a fun and memorable meet! If you’re too slow though it will get picked up on – same if you’re too fast!

Q: Did you have to practice your official Mickey signature?

You have to practice all your friends’ signatures to make sure they’re as close to the original as can be! & if they’re not, people will snitch on you for a bad signature!

Q: On a scale of 1 to FIRE, how hot is it under the costumes?

In the Winter it can be quite cosy! But in the Summer it can get pretty sweaty! However, when it reaches over a certain temperature they’ll lower the meet and greet times and cut choreography on parade for health and safety. When it’s too cold, they’ll also swap out characters so characters like Donald and Daisy will stay indoors because their legs are on display whereas characters like stitch will be able to go out and play!

Q: With fur characters, you’re using your body language to react and mime, how was that element of the role?

Yes, you’ll often see people asleep backstage! And it’ll also depend on who you’re friends with, as some are incredibly energetic (like Stitch) but some are tamer like Scrooge McDuck. You have to adjust stances as well so if you’re friends with Scrooge, you’re a weak old duck do have to adjust your stance to an elderly person which can then hurt the next day as you aren’t used to it!

Depends who you’re on shift with! If you score lucky and end up with your friends you can have the best shifts ever but if you get people you don’t really know and there’s a language barrier it can be a pretty lonely day.

Q: How long are you guaranteed to be ‘friends with’ a certain character?

Q: What’s the best/weirdest reaction you experienced from a guest?

There was a lot… I guess the most common one would be children when they don’t know where they’re putting their hands, so that’s something you have to manage!!

The best interaction would be an evening dining shift I did and there was a child who just wanted to cause mischief and of course, Donald Duck wasn’t going to say no. So Donald and this child spent some time sneaking up on other characters and scaring them, playing hide and seek, and getting up to all sorts! It’s those shifts that really do make you realise what joy you’re bringing to people’s lives.

Q: Does anyone ever try to get you to break character?

Absolutely! People try to tickle the characters to make them laugh, they try to sneak up on them, attempt to trip them up – no idea why!

Q: It’s pretty cool to make someone’s day! How was that side of the job?

It’s rewarding but it can be very emotional and hard. A lot of children use their Make a Wish experience to come to Disney and ask to see a specific type of character. As heartbreaking as it is, I’m also grateful that these moments can fulfill that child’s last wish.

Q: Was anyone ever disastrously fired whilst you were working there?

There actually wasn’t – the most excitement was people kicking off when they didn’t get the shift they wanted.

Yes, in terms of the fact that your rent was like 400 euros per month, including your bills!!! So it felt like you had lots of spare money because you weren’t paying normal rent!

Q: What was the best and hardest part of the job?

Best was definitely seeing how truly happy the characters make the guests. Whether it was on parade or in a meet and greet, the smiles the characters got back were magical to see!

Hardest was being away from friends, family, and partners. As much as everyone says ‘we’ll come out and see you’, the reality is they can’t because it’s expensive! Some days you work awkward shift times so it’s hard to catch up with people but thankfully you make lifelong friends whilst you’re out there to distract you.

Q: Biggest misconception about working as a friend of a Disney character?

That it’s easy work! A lot of people think anyone can do it and that it sounds like a dream life but it’s incredibly hard work! A lot of mental and physical energy goes into it and it can get quite testing at times.