Category Is: Beach Reads to See You Through Your Live, Laugh, Love Summer 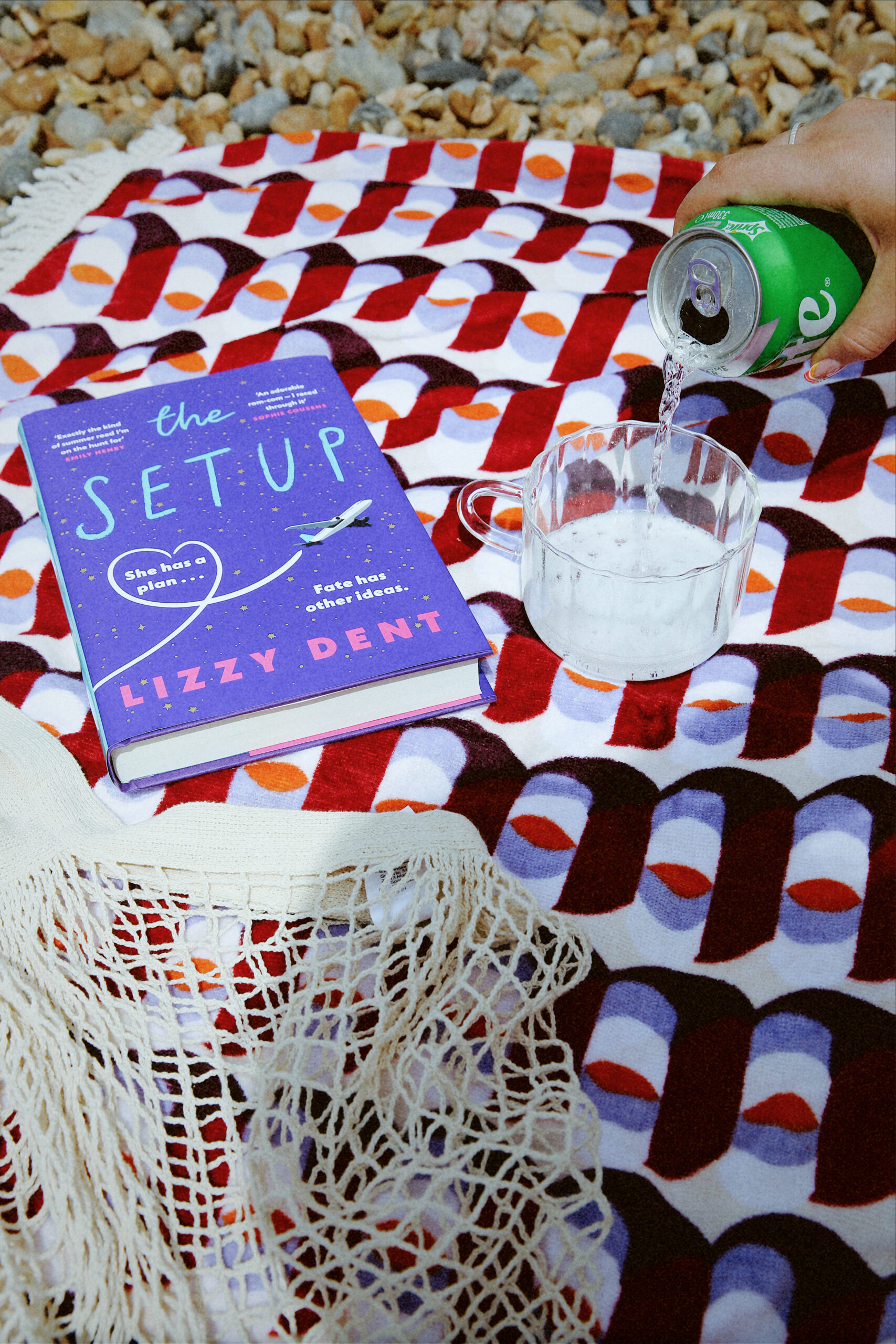 POV: it’s hotter than the Med, you’re fresh pedicure and you’ve managed to align your annual leave with this glorious heatwave. There’s only one place to be – at the beach, dipping in and out of the sea and drying off in the sun all day. Potentially with that excessive floral parasol, you bought on a whim. What can we say, it’s a genre.

No beach? No problem. These sultry reads are just as enjoyable on a grassy knoll in Primrose Hill as they are with a sea breeze and a sandy crotch.

Whether you’re hankering for some armchair travel or here for the juicy romance, these are the books worth squinting under a bucket hat for.

1. A Theater For Dreamers by Polly Samson

For a truly immersive read, look no further than A Theater For Dreamers. Set on the bohemian island of Hydra in the 1960s, amongst a circle of artists and writers, this captivating story will transport you to the balmy days and intoxicating nights of Grecian summers past. Samson skilfully blends fact with fiction, creating an absorbing story with a glorious sense of place. It’s the ultimate hot weather read!

2. Until I Met You by Amber Rose Gill

Leave it to former Love Island star, Amber Rose Gill, to deliver a rom-com you’ll be desperate to couple up with this summer.

Dubbed the most heartwarming, escapist romance of 2022, this binge-worthy debut, written in collaboration with Nadine Gonzalez, will certainly turn your head.

It was meant to be the holiday of a lifetime for Samantha: the launch of her travel blog, her best friend’s wedding and – hopefully – her own marriage proposal. Until she finds herself on her way to Tobago – single.

Disillusioned with his corporate job on Wall Street, Roman is starting afresh in Tobago. He doesn’t need a distraction, especially a free-spirited travel blogger. But something about Samantha intrigues him.

As romance blossoms, Roman and Samantha must learn to risk their hearts. But when secrets are revealed, their new relationship is put in jeopardy. Now Samantha and Roman must decide what they really want. They came to Tobago to find themselves, but could finding each other be what they needed all along?

You’ll be rooting for Samantha all the way through.

Bolu Babalola understood the assignment because this book has everything you could ever want from a romance and more. It’s got the satisfying enemies to lovers trope, it’s got the strong female lead, it’s got the uni setting, it’s got heat and it’s got banter – the vibes are simply immaculate.

It follows the sharp-tongued (and secretly soft-hearted) protagonist Kiki Banjo, a young Black British woman who has no interest in love. As the host of the popular student radio show, Brown Sugar, it is her mission to make sure the women who make up the Afro-Caribbean Society at Whitewell University also do not fall into the mess of ‘situationships’, players and heartbreak. But when Kiki meets the distressingly handsome and charming newcomer Malakai Korede – who she has publicly deounced as ‘The Wasteman of Whitewell’ – her defenses are weakened and her heart is compromised. A clash embroils them in a fake relationship to salvage both their reputations and save their futures, and soon she finds herself in danger of falling for the very man she warned her girls about…

If you need any further convincing that Taylor Jenkins Reid is a goddess of the highest order, then allow One True Loves to settle the fact.

In her twenties, Emma Blair marries her high school sweetheart, Jesse. They build a life for themselves, far away from the expectations of their parents and the people of their hometown in Massachusetts. They travel the world together, living life to the fullest and seizing every opportunity for adventure.

On their first wedding anniversary, Jesse is on a helicopter over the Pacific when it goes missing. Just like that, Jesse is gone forever.

Emma quits her job and moves home in an effort to put her life back together. Years later, now in her thirties, Emma runs into an old friend, Sam, and finds herself falling in love again. When Emma and Sam get engaged, it feels like Emma’s second chance at happiness.

That is, until Jesse is found. He’s alive, and he’s been trying all these years to come home to her. With a husband and a fiancé, Emma has to now figure out who she is and what she wants, while trying to protect the ones she loves.

Who is her one true love? What does it mean to love truly?

Let’s just say, it’s a good thing you’re at the beach so you can blame the ocean and the aggressive coastal hay fever for your sopping wet face because this book is straight up emotional damage territory. We do not deserve TJR!

5. One Last Secret by Adele Parks

From the Sunday Times Number One bestselling author of Both of Youcomes a new addictive thriller and domestic noir about power, sex work, money and revenge.

Set in a beautiful French chateau, One Last Secret follows Dora, a glamorous and whip smart escort who decides to take on one last job before leaving the industry, and all its dangers, for good. It should be a straightforward job, spending a week in the South of France, pretending to be the girlfriend of her ex-client Daniel but when Dora arrives at the chateau, it quickly becomes obvious that nothing is what it seems as she comes face- to-face with someone from her past…

Prepare to be on the edge of your sun lounger the whole way through.

6. The Unhoneymooners by Christina Lauren

The honeymoon of a lifetime… with her sworn enemy!

Olive is always unlucky; Her identical twin sister Ami, on the other hand, is probably the luckiest person in the world. While she’s about to marry her dream man, Olive is forced to play nice with her nemesis: the best man, Ethan.

Yet Olive’s luck may be on the turn when the entire wedding – except for Olive and Ethan – gets food poisoning, there’s an all-expenses-paid honeymoon in Hawaii up for grabs. Putting their mutual hatred aside, Olive and Ethan head for paradise. But when Olive runs into her future boss, the little white lie she tells him spirals out of control.

Forced to play loving newlyweds, she and Ethan find themselves in closer proximity than they ever expected. Soon, Olive finds that maybe she doesn’t mind pretending. In fact, she’s beginning to feel kind of . . . lucky.

Fun and fluffy to the max, The Unhoneymooners is the ideal read for anyone who needs to be rescued from a reading slump. Just prepare to go off buffets for a while.

7. Every Summer After by Carly Fortune

This book is getting all the buzz right now, as it should. Set in a lake house in Canada and told over the course of five years and one weekend in alternating timelines, Every Summer After is a big, sweeping look at love and the people and choices that mark us forever.

Five summers to fall in love. One moment to fall apart. A weekend to get it right.

A magazine writer has to make a choice when she returns to the lake she grew up on, and to the man she thought she’d never have to live without, in this achingly nostalgic debut.

They say you can never go home again, and for Persephone Fraser that has felt too true for the last decade, ever since she made the biggest mistake of her life. Instead of glittering summers on the lakeshore of her childhood, she spends them in a stylish apartment in the city, going out with friends, and keeping everyone a safe distance from her heart. Until the day she gets a call that sends her racing back to Barry’s Bay and into the orbit of Sam Florek.

For five summers, through hazy afternoons on the water and warm summer nights working in his family restaurant and curling up together with books-medical textbooks for him and work-in-progress horror short stories for her-Percy and Sam had been inseparable. And slowly that friendship turned into something breathtakingly more, before it fell spectacularly apart.

When Percy returns to the lake to attend Sam’s mother’s funeral, their connection is as undeniable as it had always been. Percy must confront the decisions she’s made and the years she’s spent punishing herself for them, in order to determine, once and for all, whether their love might be bigger than the biggest mistakes of their past.

Nuanced, poignant and utterly readable, this tantalizing debut will have you in a chokehold. All aboard the high train!

8. The Set Up by Lizzy Dent

If there’s one book you buy at the airport this summer, make it The Set Up. Fresh, funny and feel-good, Lizzy’s Dents hot new rom-com is the perfect companion for lazy afternoons in the sunshine.

Astrology-obsessed Mara Williams’ story begins when she finds herself on an accidental solo holiday to Budapest, impersonating her fortune teller. Josef, a gorgeous Austrian cellist, sits down for a reading and before she knows it, she’s telling him his destiny will be sitting in a pub in the English seaside town of Broadgate on the last Friday of August and her name is Mara.

Enter Project Mara: three months to turn herself into the stylish, confident woman she’s always hoped to be. Meanwhile, the crumbling, formerly glamorous beachside pool club where she works is under threat and her eccentric colleagues enlist her help to save it, just as a handsome new housemate casts doubts on her ideas about “the one.” Can Mara pull off the transformation of a lifetime? And by summer’s end, will she know who is her destiny?

9. The Poet by Louisa Reid

“Give me the confidence of a mediocre white man

who thinks he has the right to

Written in verse and wildly original, this passionate tale of coercive control and female solidarity is nothing short of a work of art.

Bright, promising Emma is entangled in a toxic romance with her old professor – and she’s losing control.

Cruel, charming Tom is idolized by his students and peers – confident he holds all the cards.

In their small Oxford home, he manipulates and generals her every thought and act. Soon, he will push her to the limit and she must decide: to remain quiet and submit, or to take her revenge.

The Poet It is a portrait of a deeply dysfunctional relationship, exploring coercive control, class and privilege, but it is also a page-turning exploration of female solidarity and survival.

Fans of plotless books, we’ve got you! Outline is the first installation in Rachel Cusk’s fictional trilogy, also featuring the novels Transit and Kudos.

Set during an oppressively hot summer in Athens, the story follows a novelist teaching a creative writing course. Whilst in Greece, Faye encounters all kinds of characters who talk to her intimately about their lives, whilst she re