Everything Coming to Netflix This September 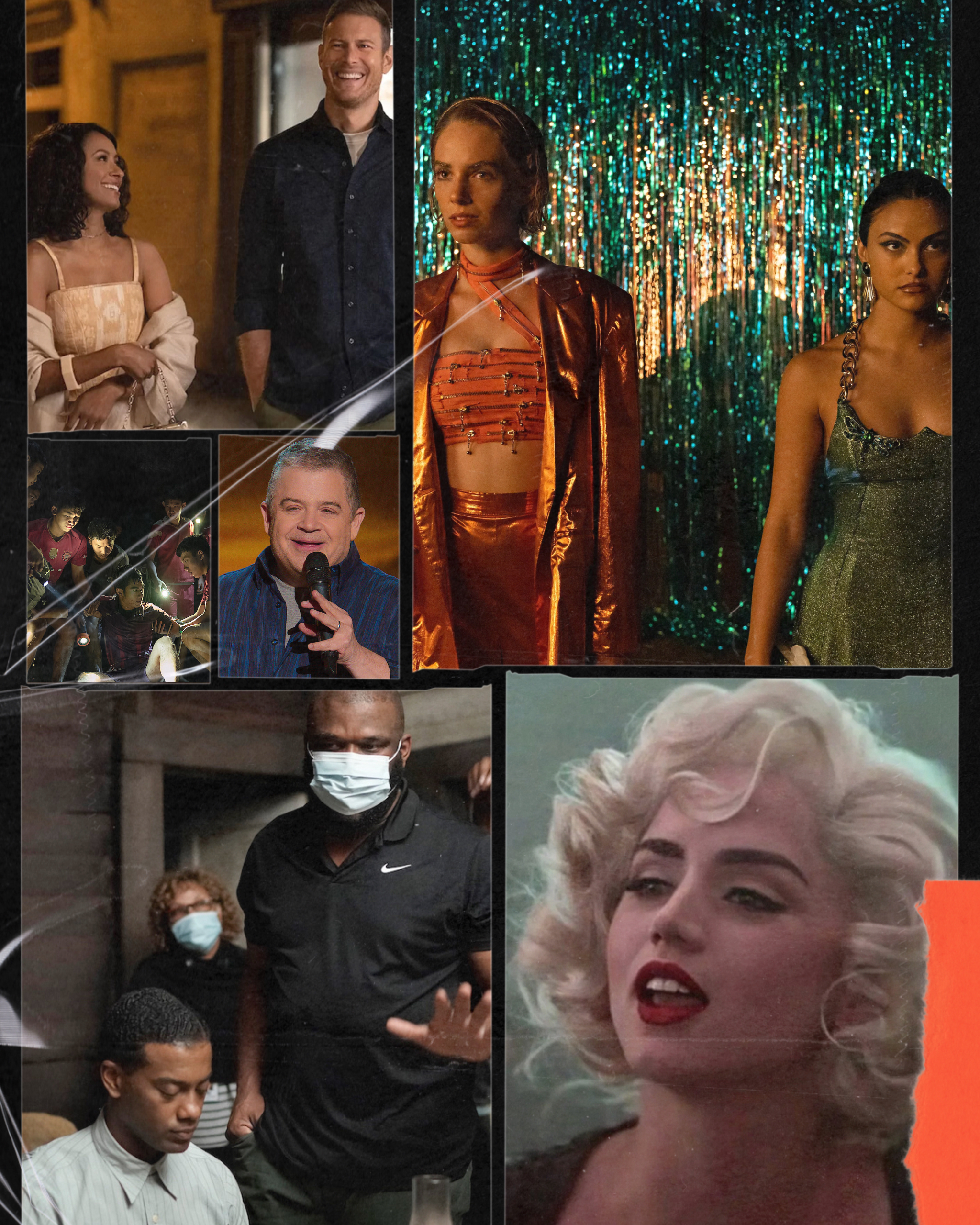 Summer, you’ve been great, but you know what sounds really appealing right about now? Sleeping, without a fan on. Drinking hot coffee. Popping on a jumper. Have a cozy day indoors. Does anyone remember what these things felt like?

The weather may still be warm, but as we look towards September and the autumn months ahead, the prospect of a day lounging on the sofa after lighting a new Homesense whilst delving into a cinnamon-covered snack sounds positively dreamy.

If you too are fantasizing about time at home after possibly the most sociable summer of your life, may we suggest some addictive new watches to fill your alone time with? From Marilyn Monroe-inspired blonde, to edge-of-your-seat series like The Thai Cave Rescues, Netflix really did understand the assignment when it came to their September releases. Check out the below new titles hitting ‘Flix throughout the month, and get ready to cancel your plans…

Love In The Villa, 1st September.

Although it somewhat sounds like a reworked title of Love Island, Love In The Villa is in fact a fictional tale that’s basically rom-com heaven. The film follows a young woman who takes a trip to romantic Verona, Italy, after a breakup, only to find that the villa she reserved was double-booked, and she’ll have to share her vacation with a cynical (and very good- looking) British man. Although IRL this sounds pretty terrible and like a formal complaint email in the making, in the world of romantic movies it’s the perfect setting for an inevitable love story to blossom.

Featuring The Umbrella Academy‘s Tom Hopper and The Vampire Diaries‘ Kat Graham, save this watch for a rainy September day when a serotonin boost is top of your ‘need’ list.

Off the Hook, 1st September

Netflix Originals hit different, and with the Stranger Things shaped hole in our heart that’s only got bigger since the Season 4 finale has been and gone, it’s time to welcome a new obsession into our lives.

Off the Hook follows roommates Lea and Manon after realising their relationship with the Internet is getting seriously toxic before deciding to abandon devices for a full 30 days. The romantic comedy provides a much needed dose of light relief in what feels like a very intense world, and dropping on the 1st of September, the series can help you can shake your end of festival season and heatwave blues.

The category is *sounds gross but will press play anyway*. Netflix’s new reality TV show is a spin on the traditional dating show, this time involving siblings- get your mind out of the gutter people, not like that! The show sees 16 single contestants – all pairs of siblings – enter a villa in the South of France before going on a series of dates in front of their brothers and sisters. It’s a niche concept, but someone’s gotta do it…

The show’s title is purposefully provocative, but since Love Island wrapped at the beginning of the month the floor is open for a dating show that’s not prepared to ruffle feathers and spark some trending tweets. Drama- we’re ready for you.

Camila Mendes and Maya Hawke aka two of Netflix’s existing golden girls (we’re talking Riverdale and Stranger Things) make a powerful duo in this dark comedy landing mid month. The film follows Drea (played by Camila) and Eleanor (Maya) as the two set out on a quest to get revenge on those that have wronged one another after following a series of unforgivable decisions made by their fellow classmates. From a leaked intimate video to a summer camp bully that needs to be put in her place, Do Revenge is a tale of female allyship through a Gen Z lens that sits somewhere between Heathers and Mean Girls.

Directed by Someone Great writer Jennifer Kaytin Robinson and her collaborator, Celeste Ballard it’s set to include a killer soundtrack thanks to help from Gossip Girl music supervisor Rob Lowry and eldest Haim sister, Este Haim. We love!

More light relief incoming thanks to this Netflix Original Stand-up Special with Patton Oswalt, covering everything from the dangers of ageing, who he could have been had he just followed the list he created during the lockdown and more. Filmed at Paramount Theater in Denver Colorado, this is Patton’s directorial debut and his fourth comedy special. Add to your list when you’re in need of some serious feel-good energy and get ready to LOL, literally.

Inspiring, heartfelt and emotional, the 2018Tham Luang cave rescue that captured the attention of the world is coming to Netflix on the 22nd of September, and it’s set to be intense.

The story follows the real life tale of a dozen boys and their football coach who became trapped in a cave after it flooded during a sudden monsoon in Northern Thailand in 2018. The incident sparked an international rescue effort as TV crews from across the world documented the unbelievable two weeks during which the boys were trapped in limestone caves near Chiang Rai. Filmed entirely in Thailand by an international group of filmmakers, the series unravels the boys’ stories, and those of their families, over the course of six episodes.

“I am very proud to have this opportunity to tell the stories behind the faces and names we have come to know well over the course of this world-famous rescue operation.” Co-Director Baz Poonpiriya says. Prepare to be on the edge of your seat from start to finish.

An investigation into an unsolved murder unveils a story full of forbidden love, deceit and secrets, meaning this Netflix Original film has all the ingredients for a juicy, enticing watch worth setting reminders for.

Soundtracked by juke joint blues, its story is set in post-World War II South where a young Black jazz singer leaves his rural town in search of fame. Although we don’t know much more about the plot ahead of its release, it’s set to be a memorable one having been in the works in one way or another for over 2 decades! The film was the first screenplay that director Tyler Perry ever wrote 26 years ago, with Netflix finally snapping it up and creating the perfect partnership to bring its tale to the screen.

You have been warning, this Netflix movie is definitely going to be your September obsession…

Blonde aka the adaptation of Joyce Carol Oates’ 2000 novel of the same name is debuting on Netflix on the 23rd September, offering a fictionalised chronicle of the life of Marilyn Monroe in the 1950s and 60s, and it’s set to be a corker. Following Monroe from her traumatic earlier life to her move to Hollywood and the glamor, exploitation and tribulations that came with it all, the film provides a look into the world of the pop culture icon who defined blonde for so long. Directed by Andrew Dominik and starring No Time To Die star Ana de Armas, the highly anticipated biopic is set to be one for the history books. It’s worth noting that although Blonde is centerd around Marilyn’s life and career, much like the book it is based upon, the story is considered to be a ‘reimagining’, including added creativity and fantasy for that extra bit of *spice*. And spicy it sounds, thanks to its 18+ rating and reportedly graphic sex scenes, the film is not one to watch on your commute home…

Premiering at Venice Film Festival before dropping on Netflix on 28th September, block out your diary and get a Domino’s on speed dial for this one.

And If all that wasn’t enough, you can also catch all of the below!

Snow White and The Huntsman

The Festival of Troubadours

The Girls at the Back

Too Hot To Handle (Brazil)