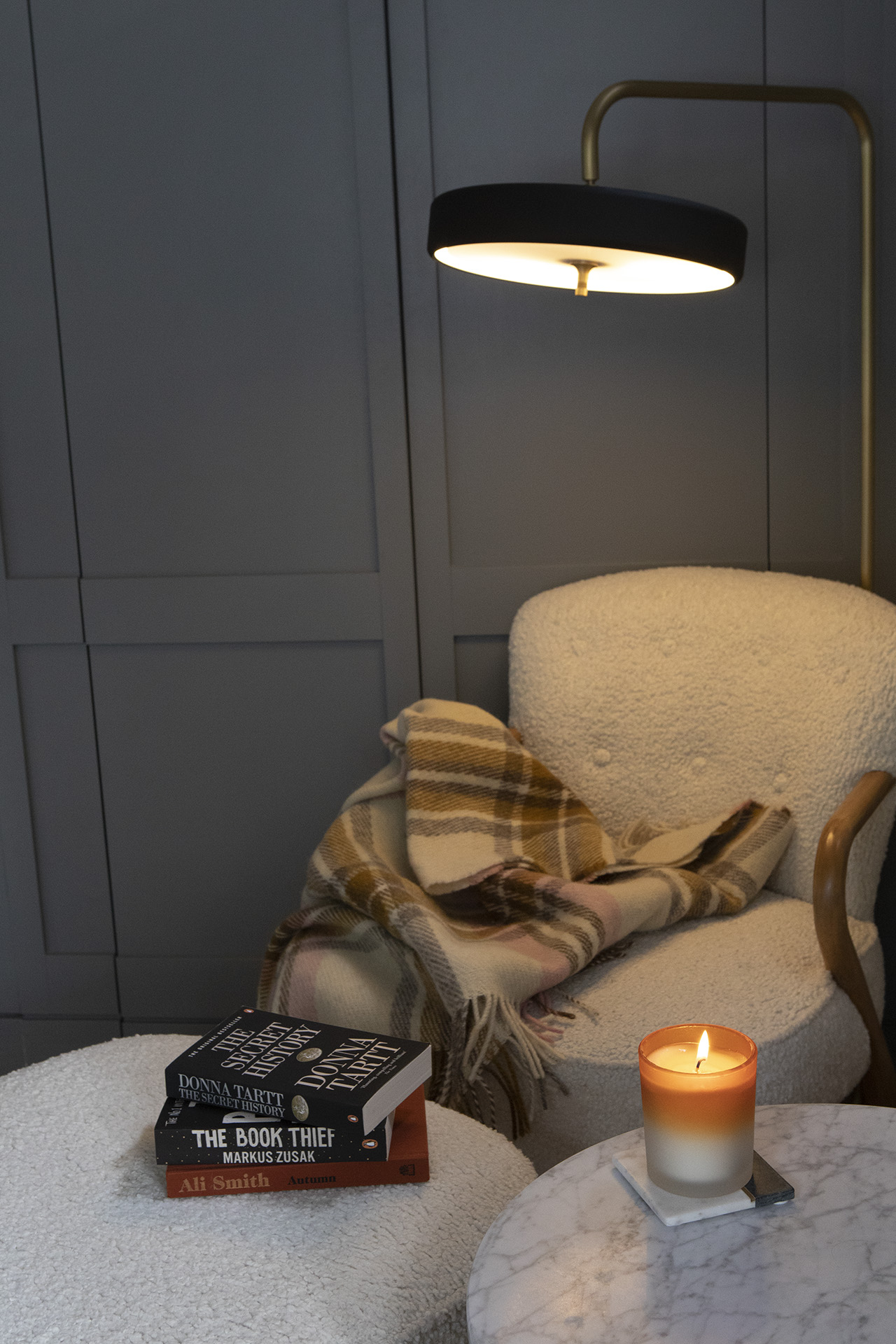 As August slips away into a moment of time and the trees strip off into their golden, barely-there ‘fits, our reading tastes get their very own hygge treatment as we begin swapping beach reads for fireside fiction and something a little more When Harry Met Sally.

Whether you’re looking for a romance novel to soothe your soul, a dose of magical realism or a hair-raising thriller, this lot will gladly hold you hostage in your reading nook on a rainy day. Plans that require going outside to be with people instead of books? Urgh, we don’t know them.

3-2-1, let there be candlelight and dark academia. Hot sad girl autumn is here and *these* are the books you’ll want on your TBR (To Be Read) pile for the occasion.

Right at the top of the list of books you’d like you receive as a gift this season. In the first installation of her seasonal quartet, Ali Smith delivers a poignant and dreamlike exploration of how we experience time.

Set against the aftermath of the Brexit-vote, the narrative follows a 32-year-old woman named Elisabeth and her mother’s neighbor Daniel Gluck, a 101-year-old man at the end of his life. It goes back and forth in time, switching between present day and flashbacks to her childhood and adolescence, where we learn how Elisabeth (with an S) becomes lifelong friends with this man.

Imaginative, timely and unexpectedly funny, it’s a novel that you’ll want to re-read as soon as you close the cover.

The Secret History by Donna Tartt

Hailed as a modern classic and a book you’ll force your friends to read, Donna Tartt’s The Secret History is a compulsive, haunting and atmospheric thriller, perfectly matched for the moody autumn months. As long as you understand that you do not consume literature, it consumes you, you and this book will get along just fine.

Under the influence of their charismatic classics professor, a group of clever, eccentric misfits at an elite New England college discover a way of thinking and living that is a world away from the humdrum existence of their contemporaries. But when they go beyond the boundaries of normal morality their lives are profoundly changed and forever.

For fans of Stranger Things, Harry Potter and books set in the Victorian era, this beautiful brick (she’s a thick one at nearly 700 pages) will have you in a chokehold. The first in Miro’s dark fantasy trilogy introduces the Talents – a group of orphaned, supernaturally gifted children charged with the salvation of an entire world.

1882. North of Edinburgh, on the edge of an isolated loch, lies an institution of crumbling stone, where a strange doctor collects orphans with unusual abilities. In London, two children with such powers are hunted by a figure of darkness – a man made of smoke.

Charlie Ovid discovers a gift for healing himself through a brutal upbringing in Mississippi, while Marlowe, a foundling from a railway freight, glows with a strange bluish light. When two grizzled detectives are recruited to confront them north to escort to safety, they are confronted by a sinister, dangerous force that threatens to upend the world as they know it.

What follows is a journey from the gaslit streets of London to the lochs of Scotland, where other gifted children – the Talents – have been gathered at Cairndale Institute, and the realms of the dead and the living collide. As secrets within the Institute unfurl, Marlowe, Charlie and the rest of the Talents will the truth about their abilities and discover the nature of the force that is stalking them sometimes: that the worst monsters come bearing the sweetest gifts.

With immaculate worldbuilding, nuanced villains and all the X Men vibes, Ordinary Monsters is a binge worthy to read, despite its heinous size.

The Book Thief by Markus Zusak

Another weighty tome for your autumn tbr pile. The Book Thief is a tragic and beautiful story set in Nazi Germany during World War II. Narrated by Death itself, it centers around nine-year-old Liesel’s coming of age as she arrives at the home of her new foster parents following the death of her younger brother and the arrest of her communist father. At her brother’s burial, she discovers a book left behind by one of the gravediggers and so begins her vocation as the eponymous book thief. As the situation in Germany worsens, her foster parents hide a young Jewish man named Max Vandenburg in their basement. It is here, with the help of her kind-hearted foster father Hans that Liesel learns to read. Meanwhile she befriends Max who writes stories about their friendship – cue the tears. A book that’ll give you emotional damage and change your life on the same page? This one.

The House of Fortune by Jessie Burton

In the coming-of-age sequel to former Waterstones Book of the Year The MiniaturistJessie Burton crafts another exquisite story of family and fate set in early 18th-century Amsterdam, 18 years after the events of the first book.

Thea Brandt is about to turn eighteen and she can’t wait to become an adult. Walter, her true love, awaits Thea at the city’s theatre. But at home on the Herengracht things are tense. Her father Otto and Aunt Nella bicker incessantly and are selling furniture so the family can eat. And, on her birthday, the day her mother Marin died, secrets from Thea’s past threaten to eclipse the present. Nella is feeling a prickling sensation in her neck, which recalls the miniaturist who toyed with her life all those years ago . . .

If you loved The Miniaturistyou’re guaranteed to enjoy returning to the Brandt household in this atmospheric follow up.

The Starless Sea by Erin Morgenstern

No plot, just vibes. From the best-selling author of The Night Circus – fii, also one to add to your autumn reading list – The Starless Sea is a book so good, you’d sell your grandmother to read it again for the first time.

An ode to reading and storytelling, it follows main character Zachary as he finds a book in his college library that, oddly enough, is all about his own childhood. He stumbles through a hidden doorway that leads him into a labyrinth of tunnels, stories, ballrooms and honey-soaked shores hidden under the earth – the starless sea.

For anyone who loved the whimsical lyrical writing style of The Night Circus, consider this cocktail of magic, mystery and dark academia a must-read this season. Booking a bee key sword tattoo as we speak!

Other Birds by Sarah Addison Allen

Fans of magical realism will LOVE this enchanting tale of lost souls, lonely strangers, secrets that shape us, and how the right flock can guide you home…

Right off the coast of South Carolina, on Mallow Island, The Dellawisp sits—a stunning old cobblestone building shaped like a horseshoe, and named after the tiny turquoise birds who inhabit the island.

When Zoey comes to claim her deceased mother’s apartment on an island outside of Charleston she meets her quirky and secretive neighbors, including a girl on the run, two estranged middle-aged sisters, a lonely chef, a legendary writer, and three ghosts. Each with their own story. Each with their own longings. Each whose ending isn’t yet written.

With fully developed characters and a beautiful sense of place, this feel-good story will be a welcome rainy day read. Five whimsical stars.

If We Were Villains – ML Rio

Top of the list of books TikTok convinced us to read.

The Secret History meets Shakespearean drama, If We Were Villas follows seven Shakespeare-obsessed students, all attending an elite theater school. They’ve always been best friends but in the fourth year, rivalries have started, and things go from bad to worse real quick when one of the students ends up dead…

What really happened that night and why is Oliver in prison for 10 years? Did he do it, or were one of the other six morally gray actors responsible?

If you’re after a happy ending, ma’am, respectfully keep it moving. Expect flawed characters that you want to punch for 90% of the time – this is dark academia at its very best.

The Atlas Paradox by Olivie Blake

The author responsible for the viral sensation that is The Atlas Six is back with the long-awaited sequel and it’s set to be electrifying. The things we would do to get an early copy of this book and not one of them is holy.

Inside the Alexandrian Society (a secret society of magical academicians), alliances will be tested, hearts will be broken. All must pick a side…

A food writer turned cannibal serial killer, who’s eaten her past lovers? Chelsea G. Summers, you have our attention. A Certain Hunger is an absolute banquet of suspense and feminine rage, following the main character, Dorothy Daniels, as she looks back on the heinous crimes that landed her in prison. Read: turning hot men into gourmet meals. Care to see the dessert menu?

NB: we fully advise checking the content warnings for this one because the gore and body horror is a lot. Eg chapter 13 will make you nil by mouth by choice.

All the books on this page have been selected by our editorial team however it does include ad-affiliate links.