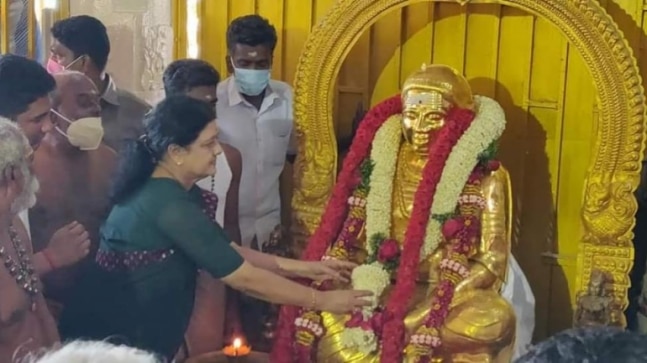 All India expelled Anna Dravida Munytra Kazagam (AIADMK), Secretary General V. NS. Sasekala is determined to regain control of the party. On Friday, October 29, Sasikala embarked on a tour, allowing cadres from Thanjavur, Madurai, Sivagangai and Pudukutai to meet her. The announcement came a few days after she raised the party’s flag and unveiled a plaque that proclaimed her the “General Secretary”.

Interestingly, her tour coincided with Guru Puja of Bassumbon Muthuramalinga Thevar, an idol of Thevar community who holds the status of God among them. Earlier, during the AIADMK regime, Jayalalitha gifted a full 13kg gold mask to cover the Muthuramalinga Thevar statue during Guru puja festivities. Sasekala pays tribute to the statue of Muthuramalinga Thevar in Madurai on Friday.

Sasekala, O Bannerselfam, Sailor Raju, RP Udayakumar and many other senior leaders belong to the community.

Although Thevar community had a stronghold within the party during the reign of MGR and Jayalalitha, it declined after Edapadi K Palanisamy came to power and started the rise of the Gounder community where SP Velumani and Thangamani gained prominence.

Although O Panneerselvam was selected as coordinator and Edapadi K Palanisamy as co-coordinator, the latter had more authority, being CM of Tamil Nadu.

Sources within the party claimed that the OPS, though, was the reason for excluding Sasekala and her family from the party. Since then, he has become soft on Sasekala, which was also clear enough from his last statement that he claimed that the party’s top leadership would discuss and decide to include Sasekala in the party, unlike EPS, who said there was no way to allow Sasikala to enter the detour.

The OPS change of position also coincided with Sasekala’s call for ‘forgive and forget’ after celebrating AIADMK’s 50th anniversary.

As the next step, Sasekala started the tour on Friday in and around Thanjavur to meet with party cadres. The tour began with a wreath of the statues of Bassumbon Muthuramalinga Thevar and Marudhu Pandyar in Madurai.

Then I arrived at Bassumbon in Ramanathapuram district, where I paid respects at the Muthuramalinga Thevar memorial and interacted with Thevar’s relatives. Sasikala received a warm welcome in Bassumbon, reflecting its popularity among the community.

Sasekala will remain in Thanjavur and meet the party cadres.

Meanwhile, within AIADMK, a rift apparently emerged as party leaders began to take sides – between OPS and EPS.