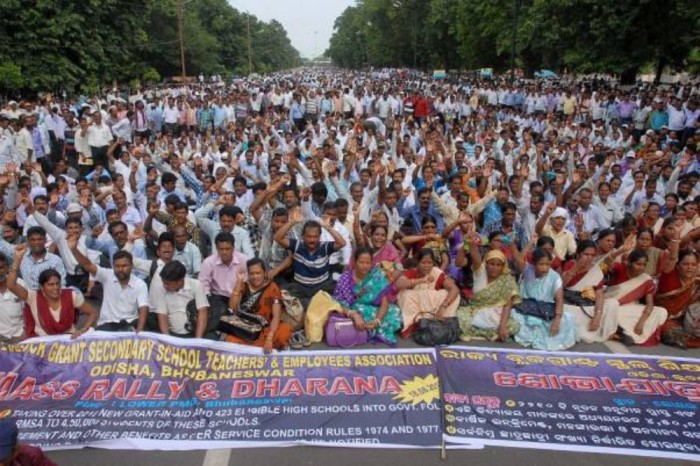 Protests by the Bharatiya Janata Party (BJP) to demand the resignation of Odisha’s Minister of State for Home Affairs Dipya Shankar Mishra for his alleged involvement in the Bulangir teacher murder case continued across the state on Saturday despite the minister denying any role in the killing.

The minister broke his silence yesterday, nearly two weeks after his name appeared in the case due to his alleged proximity to Gobinda Sahu, the main accused in the case who was arrested.

He said that he would not only resign his position as minister, but also retire from public life completely if an iota of evidence was presented about his involvement in the case.

“I swear in the name of Maa Manikeshwari (the chief deity of Kalahandi) that I have nothing to do with the case,” he said in a written statement.

Despite his denials, the BJP is monitoring a 12-hour range from 6 am to 6 pm in Kendrapara, Jagatsingpur, Balasore and Budd districts and 6 hours in Bhadrak district to pressure its demand to remove Mishra from a cabinet.

Normal life, especially vehicular movement, was seriously affected in all these places.

Asked why the party continued to demand the minister’s resignation even after the minister had clarified its position, BJP spokesperson Likhshri Samantarai said; “The minister cannot evade his responsibility by simply summoning the goddess Manekeshwari. It must be evident from his close links with the accused of murder.” How can a fair investigation be expected if he continues to hold the position of Minister – and Minister of the Interior at that time? “This is why we are asking for his resignation,” said one of the protesters in Balasore.

While he called for justice for the family of Mamita Mihir, the deceased teacher, and tougher punishment for the culprit, the two-page statement issued by the minister yesterday distanced himself from his relationship with Gobinda Sahu, the accused who founded the Mahaling School in Calhandi where Mehr was studying.

Nor did he mention the “reconciliation meeting” he allegedly called between Gobinda Sahu and Mamita at his home in Raipur. Congress leader Narasinga Mishra and BJP leader Bijoy Mohapatra both claimed that the minister called the meeting days before the killing in a bid to bring the two together.

On the other hand, Deputy Inspector General (DIG), Northern Domain, Deepak Kumar, denied the allegations of two senior opposition leaders that he had sent a report on the meeting at the minister’s residence to the Prime Minister’s Office (CMO). “It is completely wrong. There is no such report,” he said.