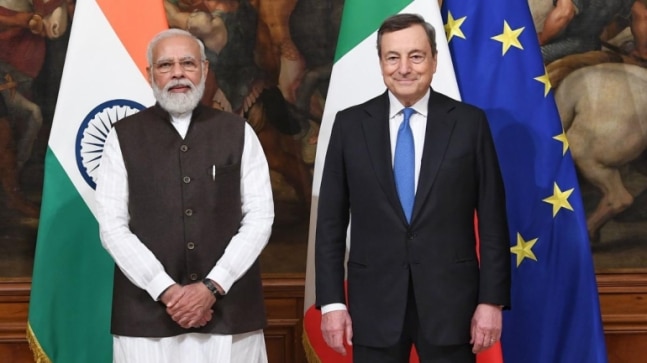 Prime Minister Narendra Modi on Friday held his first personal meeting with his Italian counterpart Mario Draghi on the sidelines of the G20 summit here, during which the two leaders held extensive talks on diversifying bilateral relations.

Prime Minister Modi, who arrived here earlier today at the invitation of his Italian counterpart, was greeted on his arrival at Shige Palace for the meeting.

Prime Minister Modi was also given a guard of honor.

“The synergy of the India-Italy partnership! PMnarendramodi was received by Italian Prime Minister Mario Draghi, upon his arrival at Palazzo Chigi for their first in-person meeting. The two leaders inspected a guard of honor before embarking on delegation level talks,” the ministry tweeted by Foreign Affairs Spokesperson, Arindam Bagci.

“PMnarendramodi & PM Mario Draghi reviewed the 2020-2025 action plan for the bilateral partnership between India and Italy, and reiterated the commitment to expand trade and investment ties,” he said.

“They are determined to cooperate to accelerate the transition of clean energy to combat climate change,” Baji added.

Synergistic partnership between India and Italy!

evening Arenarindramody He was greeted by Italian Prime Minister Mario Draghi, upon his arrival at Palazzo Chigi for their first personal meeting.

The two leaders inspected the guard of honor before beginning the delegation-level talks. pic.twitter.com/3s5HqWW0VX

It also resolved to cooperate to accelerate the transition of clean energy to combat climate change. pic.twitter.com/Z11Sh364uF

In his departure statement on Thursday, Modi said he would visit Rome and the Vatican City from October 29 to 31.

“During my visit to Italy, I will also visit the Vatican City, to invite His Holiness Pope Francis and meet with the Minister of Foreign Affairs, HG Cardinal Pietro Parolin,” Modi said.

From Rome, Modi is traveling to Glasgow, UK, at the invitation of British Prime Minister Boris Johnson.