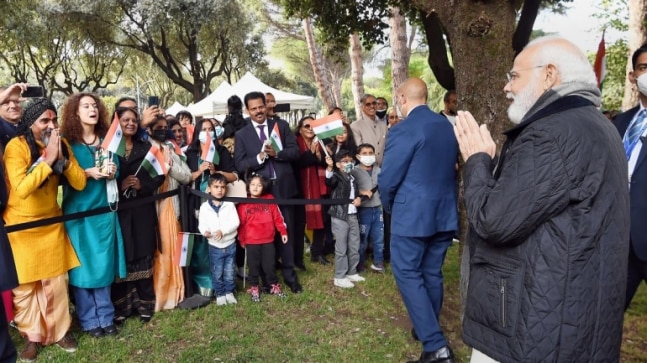 Prime Minister Narendra Modi visited Gandhi Square in Rome on Friday to honor Mahatma Gandhi. He also interacted with a group of Indians there who received him in Gujarati. Prime Minister Narendra Modi Visit Gandhi Square in Rome Friday to honor Mahatma Gandhi. He also interacted with a group of Indians there, who greeted him in Gujarati and chanted Sanskrit chants.

Someone shouted, “Narendra Bhai, Kim Choo? [How are you]Prime Minister Maha Ma Chu responded [I am fine]With a smile.

Another person spoke to Prime Minister Narendra Modi in Gujarati about his work in yoga and Ayurveda.

The crowd gathered there and chanted slogans such as “Bharat Mata ki Jai” and “Modi Modi”. While a group recited Shlokas in Sanskrit, Prime Minister Modi responded “Umm Namah Shivai” with folded hands.

Prime Minister in Rome to participate in the G-20 summit. pic.twitter.com/G13ptYOAjB

Prime Minister Modi in Rome The two-day G20 summit will focus on sustainable development and climate change among others. The theme of the meeting is “People, Planet and Prosperity”.