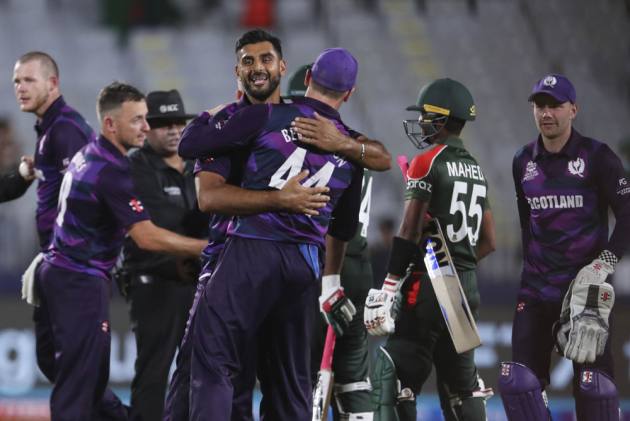 Graves led an impressive lower-level fight with a 28-ball 45 as Scotland recovered from a hopeless situation to score 140 to nine in the first round of the opening Group B of the T20 Championship.

Called to the bat first, Scotland were reeling at 53 to six in 12th before Graves added 51 passes with Mark Watt (22 of 17 balls) to prop up Scotland.

In response, Bangladesh were halted at 134 to seven in their 20-plus quota with Greaves returning to excellent figures of 2/19 in three overs, which included vital wickets for superstar Shakib Al-Hassan (20) and veteran Mushfour. Raheem (38).

This is Scotland’s second World Cup win, and the first to come in the 2016 edition of the tournament against Hong Kong.

If 24 times from the final needed to throw the ball by medium speed Safian Sharif (0/26), Mahdi Hassan (13 not out) and Muhammad Seif El-Din (5 not out) they couldn’t achieve a miracle.

For Scotland, Brad Will (3/24 on four times) and spinner-legged Greaves were star performers with the ball, while Josh Davy (1/24) and Mark Watt (1/19) were big support.

Watt also continued his performance with the bat with a great show of bowling.

Skipper Mahmudullah (23 years old) and Afif Hussain (18 years old) keep Bangladesh in the process of searching with some innovative shots. Left-handed Hussain went to get a big one from Wat’s left spinner only to see Davey pick up in the rear.

It was not easy for the Bengali hitters against a disciplined attack in Scotland. Somaya Sarkar (5) went for a big shot and failed to clear the player to leave Bangladesh at 8 to 1.

Experienced Shakib helped Mushfiker add 47 strokes to the third wicket before mistaking a half-track off Graves for McLeod to run and get a good catch.

One of the team’s extensively experienced players, Mushfour opened up after a period of reinforcement and hit an impressive sixty and looked in control before a scoop attempt hit a good shot from Graves causing his leg to fall again to put the Bangladeshi in. In a spot of fuss.

Earlier, Scotland were off to a bad start as they lost their captain Kyle Koetzer (0) to Saifuddin by just five runs on the board in the third inning.

Then the two gazelles – Shakib and Mohidi Hassan – took over and increased the woes of Scotland. Hassan broke two wickets on his first run when he knocked out wicket-keeper Matthew Cross (11) and George Muncie (29) after the two added 40 runs to the second wicket.

This was after a great showing by the Bengali bowlers in a power game where they tied Scotland 39 to one in their first six overs.

Shakib joined the party by dumping Richie Bearington (2) and Michael Lisk (0) to leave Scotland at 52 for five, which quickly became 53 for six when Hassan picked up his third share in the form of Callum MacLeod (5).

Then Graves, hitting sixty-four, came to their rescue with his rounds of pushing Scotland.