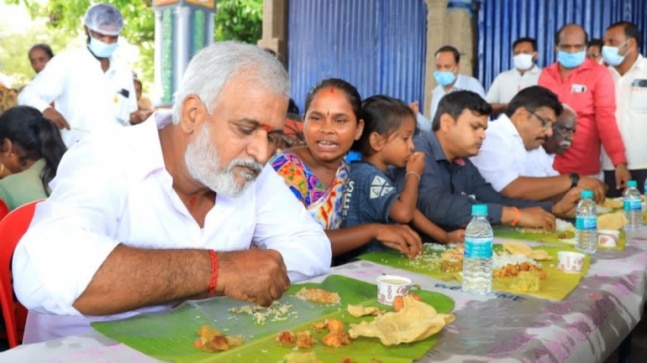 Tamil Nadu State Minister PK Sikar Babu was seen having a meal with a woman who claimed to have been deprived of ‘Anadhanam’ and was allegedly assaulted at Kanchipuram Thalasianar Temple. A Tamil Nadu minister dining with a tribal woman.

Tamil Nadu’s Minister of Hindu Endowments and Charity (HR and CE) PK Sikar Babu on Saturday shared a meal with a tribal woman who said she was deprived of an “Annadhanam” (free meal) and was allegedly beaten in a temple in the state.

The tribal woman had complained that she and her family members were humiliated during the “Annadhanam” at the Kancheepuram Thalasainar Temple.

The woman said that she went to the temple with her family members and just before the food was served, the workers came and asked them to leave. She protested and was allegedly beaten. She also said that she may have been offended for joining the Narikurava (Scheduled Tribe) community.

A video of her allegations spread with social media users criticizing the temple administration for their treatment of the woman and her family.

State Minister PK Sikar Babu visited the temple on Saturday and assessed the situation. The woman was recognized and asked to join him and other senior officials for a meal at the temple.

After having a meal with her and other Narikurava people from the area, Sikar Babu said officials were instructed to treat everyone equally and with respect.

Also Read: Tamil Nadu: Irula tribe members say they were beaten and urinated after couple of different castes ran away