TDP workers suspect a man carrying a bomb, and beat him during the Associated Press’s Chandrababu Naidu show in Cobham. 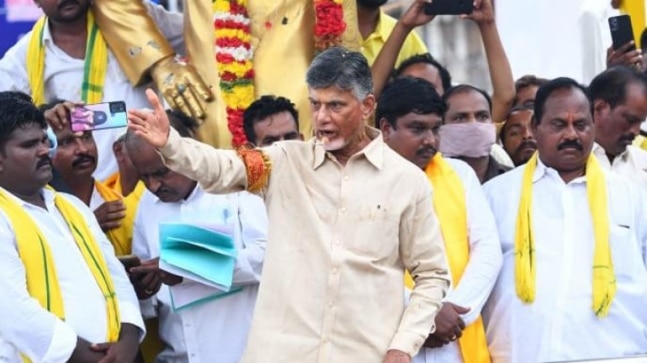 Tension prevailed during the promotional campaign for Telugu party chief Desam Chandrababu Naidu in Copham, Andhra Pradesh on Friday after party workers suspected a man carrying a bomb and beat him. Tension prevailed during Chandrababu Naidu’s roadshow in Kubham, Andhra Pradesh on Friday after party workers suspected a man carrying a bomb and beat him.

Tension prevailed during the promotional campaign of Telugu party leader Desam Chandrababu Naidu in Cobham, Andhra Pradesh on Friday after party workers suspected a man carrying a bomb and beat him.

FDP workers suspected the man was a supporter of the ruling Congress party, Yuvajana Sramika Raithu (YSRCP). They caught him and beat him when they sensed him moving suspiciously around Chandrapabu Naidu.

The police rescued the man from the crowd and took him away. Due to the chaos that followed near the podium during the roadshow on Friday, the National Guard commandos guarding Chandrapabu Naidu have published a ballistic protection sheet.

Chittoor Police Superintendent said, “The man turned out to be mentally unstable. He works as an assistant manager at Andhra Pradesh Tourism and is a native of Chandragiri in Chittoor. We found his bag full of his personal belongings.”

Amid tight security, the party’s chairman, Chandrababu Naidu, arrived at his constituency in Kubham, Chittoor district ahead of the roadshow on Friday. The former prime minister has a Z+ security cover. In the past, Chandrapabu Naidu faced a bomb attack allegedly perpetrated by the Maoists in Tirupati.

During his two-day visit, Chandrababu Naidu will participate in various activities including a public meeting. He will also participate in promotional tours in nine panchayats.

During his visit, some small clashes were reported between TDP and YSRCP workers, but the situation remains largely peaceful in Cobham.