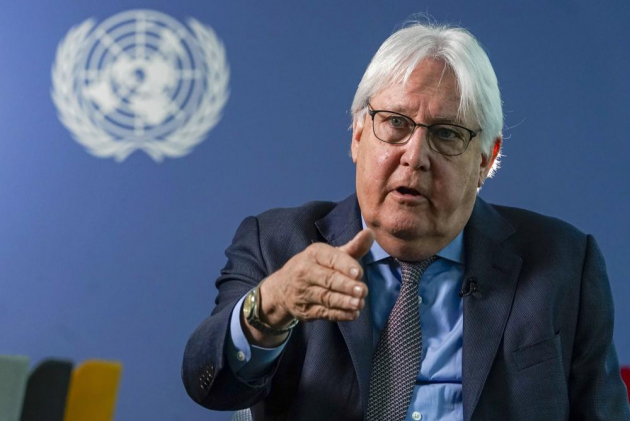 The UN humanitarian coordinator delivered a dire message to the leaders of the world’s 20 largest economies gathered this weekend: worry about Afghanistan because its economy is collapsing, and half the population is risking not getting enough food to eat because it is already snowing.

“Needs in Afghanistan are rising,” Martin Griffiths said in an interview with the Associated Press on Friday.

Half of Afghan children under the age of five are at risk of severe acute malnutrition and there is an outbreak of measles in every district which is a “red light” and a “canary in the mine” for what is happening in the community, he said.

Griffiths warned that food insecurity leads to malnutrition, then disease and death, and “in the absence of corrective actions” the world will witness deaths in Afghanistan.

He said the World Food Program was feeding four million people in Afghanistan now, but the United Nations predicted that due to harsh winter conditions and economic collapse, it would have to feed three times that number – 12 million Afghans – “and that’s huge.”

This week the World Food Program appealed for $200 million to fund its operations through the end of the year, and Griffiths urged countries that suspended development assistance to Afghanistan after the Taliban seized power on August 15, including the United States and European countries, to desperately divert that money. Need humanitarian aid. He noted that the European Union has already transferred about 100 million euros to humanitarian work.

Griffiths said the current crisis is caused by two major droughts in the past few years, disruption of services during the conflict between the Taliban and the Afghan government and the collapse of the economy.

It’s also critical that health workers, teachers and others on the front lines get paid, Griffiths said.

He said many ideas are being discussed with increasing urgency to bring liquidity into the market, and his message is that an urgent response is needed this year, not next spring.

Among the ideas are actually transferring money to Afghanistan, which Griffiths said is facing “a lot of difficulties,” and using local Afghani currency. But the problem is how to convince traders to provide Afghans safely for the use of humanitarian organizations, he said, “and they will likely only do so if they think they can get foreign currency for those Afghans.”

Griffiths warned of the exponential effects of the economic collapse, saying the number one concern is that if people do not have access to services, food, education for their children and health care, they will move, either within the country or fleeing Afghanistan to survive.

The second concern, he said, is the growing problem of terrorism, “and this is something that usually thrives in times of uncertainty and suffering.”

“It would be a terrible legacy to visit all of the Afghan people,” Griffiths said. “So far, I think we are just holding our breath about the stability of the country and we talk daily to the Taliban about what they need to do, for example, to make sure that women and girls have their rights.”

The Under-Secretary-General for Humanitarian Affairs said the Taliban needed to ensure the rights of women and girls “because this is part of Afghanistan’s stability”. (AFP)