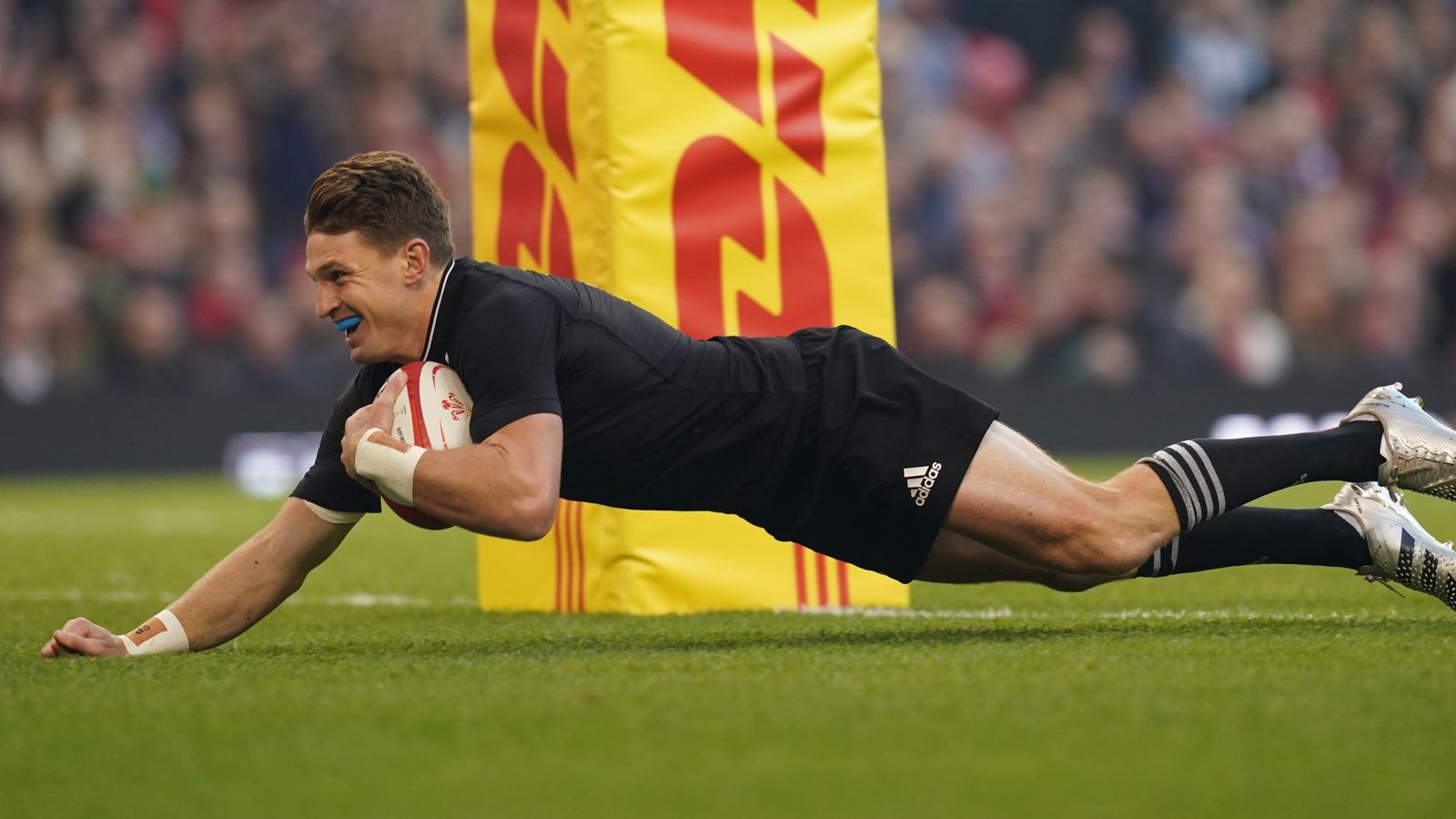 By Michael Cantillon at Principality Stadium

New Zealand kicked off their autumn tour in a convincing fashion when they trounced a depleted Wales side to win 54-16 at the Principality Stadium in Cardiff.

Wales, who was already stripped of a handful of front-line players through injury – and ineligible for this particular test – suffered further blows as well as captain Alon Wayne Jones re-injured his left shoulder, and back row left Ross Moriarty with an arm injury.

The hosts responded well and impressive winger Tyne Basham – on his first test run – netted a direct penalty in front of the defenders from the start of the second half, which Anscombe duly knocked out to score Wales on the scoreboard.

The next major flashpoint saw Wales No. 8 Aaron Wainwright’s superb counter-attack from his No. 22 side, before Boden Barrett was extremely fortunate to avoid a yellow card for an intentional knockout on the move as winger Owen Lane tried to find Williams’ midfield inside – referee Matthew Rinal Decides enough penalty.

Testing continued at a brisk pace, with the All Blacks scoring after Jordie Barrett converted a penalty from close range in the 18th minute after Wainwright was caught on the wrong side.

In the 19th minute, Wales was hit with a sledgehammer as captain Jones left with a shoulder injury – the same complaint he had before the Lions’ British and Irish summer tour of South Africa – during his intervention.

Jordi Barrett then took the All Blacks’ lead in the 26th minute by exploiting a penalty for offside – having missed a midway goal moments before, and after Nybo Laolala hit a brace in an attempt to score a yard. From the Wells Experience line.

Six minutes into the first half, New Zealand made the second attempt – however ahead by 18-3 – with half-keeper Perenara gone after a brilliant blast and discharge from number 8 Ardie Savea.

In the final two minutes of the first half, Wales kicked a corner kick when he desperately needed a result after a violation by the All Blacks, but prostitute Ryan Elias decisively knocked him out.

All Blacks tighthead Laulala’s sin was quickly dismissed after a TMO review to make contact with back row boss Moriarty – a situation from which the Welshman will not return.

A third failure in the succession ensured Wales finished the first 40 minutes without trying and a high degree of frustration – although they added another Anscombe penalty in dead time after Brody Ritalik tipped the ball off the ball.

Although the first Blacks started the second period with a lower man, it was the visitors who would bother the next scoreboard as Jordi Barrett split the rolls from 40 meters or so with a clear hit.

Laulala came back from his foul without further damage, but once he recovered 15 vs. 15, Wales pressed increasingly hard to strike their own through staged play, but they failed.

The Priestland substitute parried the home side’s third penalty of the day to dent the All Blacks’ lead somewhat, but he stayed away.

Within minutes, the Test was away from Wales as Williams kicked twice for too long, and the second time, the All Blacks Jordan wing took ruthless advantage, working his way up before moving forward, regrouping and diving.

It didn’t matter, however, as an easy and avoidable penalty kick from the start of the second half chasing them before Wales’ kick gave New Zealand a huge chance on the spot, which crashed off winger Papale.

Just two minutes later, All Blacks substitute Reese blasted off on his fifth attempt as New Zealand emptied out at high speed and accuracy down the left flank.

There was plenty of time left for two more attempts in New Zealand, where Lennert Brown brutally picked a tired Wales match to be scored by Lennert Brown, before Boden Barrett had the final say in intercepting the ball and running on the right touchline.