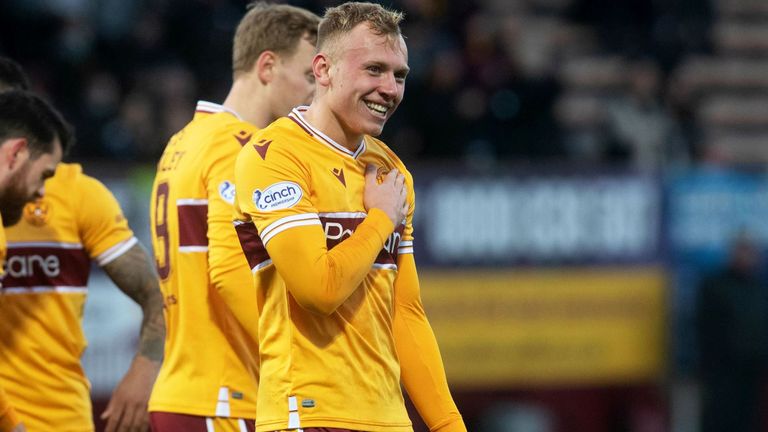 Dean Cornelius, a Boyhood Motherwell fan, scored his first goal for the club in a 2-0 win over St Johnston.

The 20-year-old midfielder raised the ball for 20 yards and fired into the bottom corner 17 minutes into his first Premier League game at Fair Park.

Kevin van Veen doubled Motherwell’s lead 10 minutes into the first half with his fifth goal of the season.

The comfortable victory at home propelled Motherwell to fourth in the standings and kept St Johnston bottom.

Saints boss Callum Davidson made four changes after the midweek defeat at Ibrox, with Eetu Vertainen out of the team entirely after being blamed for the opening goal.

But the visitors seemed lacking in confidence, as they suffered a sixth consecutive defeat and went into the fourth match without conceding the net.

Sondry Solholm Johansen made a surprise comeback in central defense for Motherwell while Liam Donnelly made his first start since mid-August with the Northern Ireland international and Cornelius entering midfield.

The opening match came after the visiting defense managed to pass a cross pass from Shawn Goss and Cornelius with half a goal.

The visitors’ best first-half moment came when Viv Solomon-Otabor sent in a cross right in front of Stevie May, and Liam Craig fired a long-range, not-so-long-range shot.

Motherwell came close again when Tony Watt drove a cross from Goss and passed the post.

Van Veen made the second goal from a ball full of hope down the left channel from Johansen. The Dutchman twisted and turned and managed to shoot past Jimmy McCart and through Xander Clarke’s legs.

The only time they threatened was in the 69th minute when Calum Booth’s shot was missed by Liam Kelly after the left-back ran to cut May.

Motherwell brought in an extra defender, Jake Carroll, for Luat in the 82nd minute and further stifled the competition.

Motherwell President Graham Alexander: “he [Dean Cornelius] He started his first game at the Hibs and is still training exceptionally well even though he wasn’t in the squad last week.

“We got a feel for the kind of match it was going to be, and what we wanted from the triple midfield, he gives us all the things we want, and he’s a good footballer.

“You can see it with his shot. It was his first league appearance at home and it was a great way to get it done with a great finish.

“I watched his video of him last week, in the stands when he was 8 on Motherwell’s set.

“That’s great, that’s what this club is about, constantly getting the boys out through the academy system. He’s gone too far but he’s back and he loves the club.

“He is training exceptionally every day and we know what a good player he can be. He still has a lot to learn and a lot to improve but I know he will make every effort to make those improvements.”

St. Johnston’s Chief Callum Davidson: “If you simplify the game, they get the first contact and interact with the second ball.

“That was it, that’s what we lost the match, which is probably the biggest disappointment for me.

“If it was tactical, if they passed it around, if they got chances from playing well….. they basically fought and won the first ball and they reacted to the second ball better. For me, it’s really hard to grab it.

“We said there, ‘How do you get out of it?’ For me, it’s all about working hard and being committed to each other.

“First of all we need to work hard and pull each other out of a hole. We need to make sure everyone is going in the same direction. We can’t have seven or eight players doing that and no one else following them.”

“There is no simple answer to that. I’ve been there in my career as an assistant manager, as a player, it’s all about working hard and being committed to each other and we have to respond after that.”

Motherwell hosts Livingston on Boxing Day (3pm), while St. Johnston hosts Ross County on Wednesday (7.45pm), before facing Celtic at McDiarmid Park on Sunday for a game you can watch live on Sky Sports Football at 12:30pm.