Atomic Heart may be a beautiful FPS, but I wish it had a silent protagonist 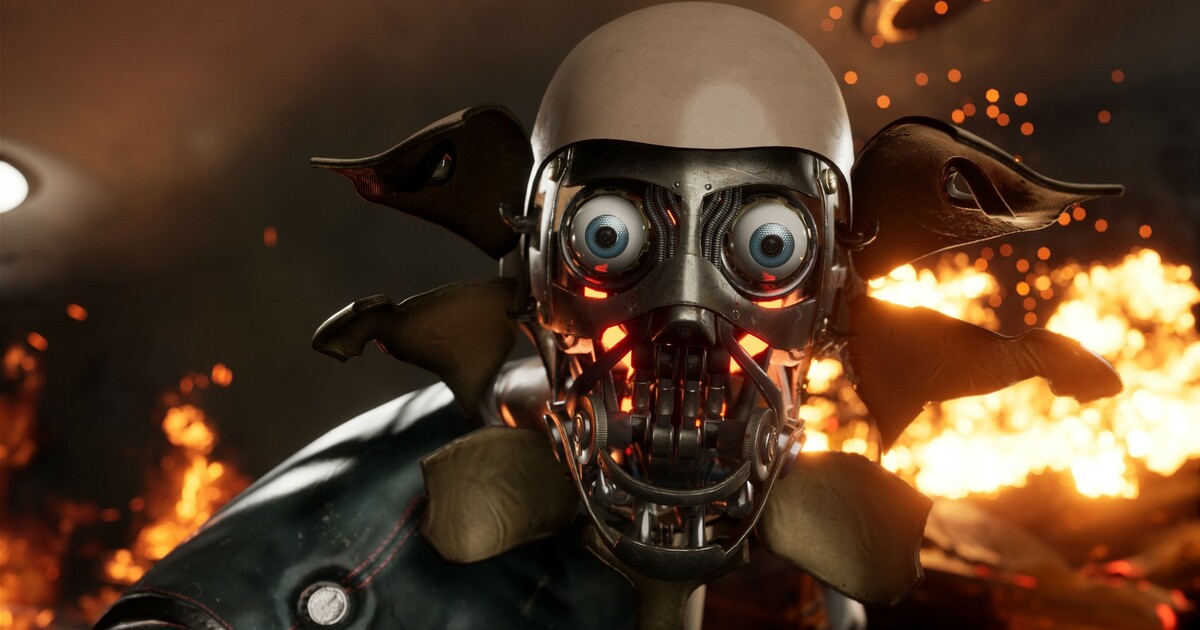 I’ve played around four hours of soviet-punk FPS Atomic Heart, which took me from the story’s opening moments to plenty of the game’s earliest bits. The final hour or so was split into two parts, thanks to a lovely dev who time-skipped me forwards and into the game’s open world, before warping me through a gate and into an early boss’s lair. There was a lot to take in, from robo-gloves, to sex-dom vending machines, to grannies with bazookas.

I went in with expectations that it might be a little like BioShock, all steely and serious in its delivery of some vaguely philosophical truth. But I emerged with a totally different impression. Far from polished seriousness, Atomic Heart seems a little disjointed in its ambition, with a main character who almost immediately kills any atmosphere when he opens his mouth.

Atomic Heart’s opening moments are easily its most impressive, as you, Major Nechaev, are ushered along the sunny streets of a USSR whose residents brim with positivity and cheer. Thanks to their magnificent leader, they’ve embraced technologies that could’ve booted Siri into the sun or made Freeview look about as advanced as a manhole cover. These people can control machines with their minds! An upbeat robotic attendant who sounds like an auto-tuned Taylor Swift hands you a special glove, as if to hammer home their technological prowess. Congratulations! You can scan the environment for stuff and shoot electricity from your palms. There’s no doubt the game takes inspiration from BioShock Infinite‘s first stroll through Columbia, as it’s all candyfloss stands manned by floating iron spheres and giant holograms beamed into a clear blue sky; you know it’s just a matter of time before this sickly-sweet theme park will come crashing down.

Eventually – after what becomes an overindulgent intro that begins to drag – a robot lifts you to a manufacturing facility that’s gone quiet, at which point everything does, in fact, come crashing down. After being attacked by a rogue bot, you’re left stranded outside the facility and must figure out why the AI’s gone haywire. A fire ax helps you fend off lairy crash test dummies, with the usual light and heavy attacks, except the heft behind all of your swings adds a nice clunk to your smacks. Combat is difficult, if a touch stiff, as you must time your hits and dodge at the right moment. So, on you go, bashing bots as you move steadily into a darker, greyer, abode.

The early portions of the facility are wonderfully realized, as you tour the disheveled offices of former workers or enter research zones home to a mechanical worm that’s carved a network of tunnels through them. While perhaps not quite as atmospheric as say, Half Life, each level certainly compels you to push forward and uncover its secrets.

As I pushed on, though, it struck me that much of what I’d experienced so far felt oddly abrupt or half-formed, particularly when it came to sudden encounters. I met a hilarious granny who armed herself with a bazooka and blasted some malicious mechs from the sky. Then without so much as a natter, we parted ways. Maybe you’ll reunite later? I met a doctor tending to some wounded, so I helped her out… and then, once again, we parted ways. Maybe you’ll see her later too? When there’s an opportunity to give the player some information, or just a chat with a friendly face, why not take it?

The game’s main protagonist also has a habit of bulldozing through any environment, or at least preventing it from building in the first place. For all of the demo, he made it clear he was more of a crass dude than an insightful hero, having called a robot a “fucking bitch” or shouted things like, “What in the sweaty hell is going on here?!”. Occasionally he’d grumble at the objective set out before him, as if him being annoyed at collecting some orbs to open a door would make the experience more enjoyable for the player. He’s counterbalanced a bit by your glove, who’s also an AI companion, but I worry that character growth could be off the cards for ol’ Nechaev.

Take stealth, which encourages you to pick up objects with your glove and chuck them to distract enemy security cameras. This sounds like standard stealth sim stuff, but the thing is that, in practice, the enemies are so sensitive to your movements that they’ll immediately twig you from all manner of angles anyway. Look, I’m not asking for Arkane’s architectural brilliance here, but rooms and corridors in Atomic Heart, while pretty, just aren’t built for the sort of stealth that seems required to survive.

It’s a shame, then, that only at rare moments do the game’s environmental puzzles align with your character’s abilities in clever ways. Like one time, where there’s this translucent polymer tunnel you’re able to swim upwards through (because science) – except that it’s just out of reach. However, there are forklift bots whizzing about who, it turns out, aren’t just a hazard, but are stunning objects that act as ramps as long as you can stop them with a zap of your glove. Oh eat! The glove! It’s something I forgot about regularly, because the game doesn’t necessarily push it as anything other than a loot-hoover early on.

As you explore, you’re encouraged to use your glove to telekinetically vacuum batteries and conductors from drawers into your backpack. You can then spend these bits at upgrade stations in safe rooms – except that the upgrade stations are these sex-crazed vending machines that spout filth as you attempt to pour 24 atoms into upgrading your axe’s damage, or crafting a new laser pistol. Not only is it uncomfortable, it’s even more baffling that these vending machines become non-nympho later, for no particular reason. I mean, it’s great that they chill out on the shagging, but also a strange thing to commit to and then drop so suddenly with zero explanation.

When games get upgrades right, they give resources weight and rarely overload you with options. One or two may unlock at a time, and not only is the path to earning them clear, but the path after you’ve acquired them is too. If you, eg, breathe a swarm of flies into existence, you should know if you can use it to turn bins that block your way into a pile of murky juice. In Atomic Heart, I rarely knew what materials I’d collected, held, or what to spend them on. The same goes for the skill tree, which is rammed with abilities from the get-go, but with no tooltips, or hints from the facility you’re trapped in that gives you a sense of what would be a smart investment.

Once I was warped to the open world, I got the sense that the glove may become a more important tool in your arsenal later into the game. I had the ability to freeze enemies with a snowy beam, or send out the gooey polymer gunge and then charge it with electricity to create a makeshift trap. The devs also kitted me out with loads of neat weaponry, including a massive tesla cannon that fired energy bubbles or one enormous orb that would fry enemies that got too close to its static tendrils.

And being dropped back into the beautiful open world was refreshing too, even if I had no idea how it fitted into the opening moments I’d just played. Will the game suddenly morph into a soviet-era Far Cry? Who knows. But the map was reminiscent of Switzerland, with rolling green hills peppered with chalets and other facilities, all overlooked by a sweeping mountain range. It was nice to be away from the gray for a bit.

For my last hurrah, I fought a rotund android that shot missiles at me and curled up into an enormous metallic marble to send shockwaves rippling across the arena. I liked how it encouraged movement, to dodge or jump out of the way of its rolls and stomps. Except the fight wasn’t as smooth or measured as I’d expected, with a jittery layer to the whole affair. Instead of feeling frenetic, it felt a bit messy.

Atomic Heart’s trailers have played their part well, making the game seem like a tremendously polished, astonishingly beautiful trip through a nightmarish soviet-punk facility. And at times in the preview I felt it hit its ambitions, and genuinely pull me into a crumbling technological idyll. Yet, a lot of the game’s earliest encounters – with its NPCs, its exploration and even its upgrades – are clumsily handled, which may only grow more problematic as the game’s scope seemingly increases.