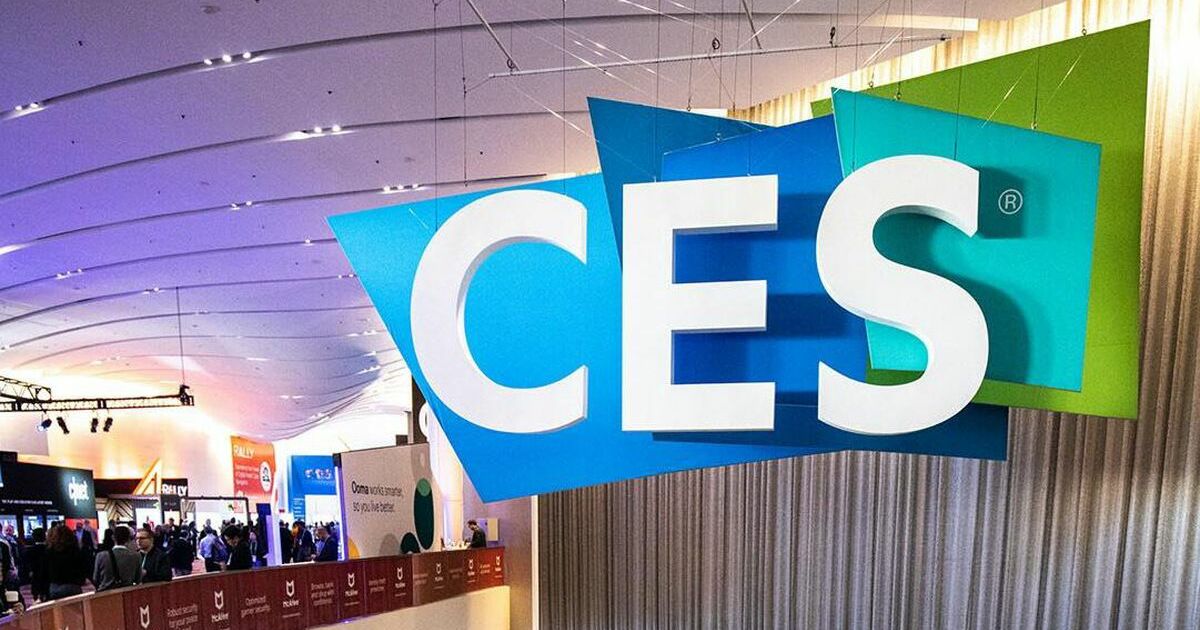 CES 2023 came and went while I was burning through a statutory holiday entitlement in the Welsh countryside, so these highlights of the Vegas tech show’s PC gaming gear reveals may be as much news to me as they are to you. Unless you caught Katharine’s writeup on the Nvidia GeForce RTX 4070 Ti, which I did once I found a smidge of 4G signal. Cheers, chief.

CES (that’s the Consumer Electronics Show) has always been a festival of the bold, the weird, the dubiously useful – it’s the kind of place where a man will stand up with an unfalteringly straight face and announce he’s disrupted the Mouli grater. Among CES 2023’s wares: rollerskates for walking, smartwatches that aren’t watchesand a chopping board that puts an attachable screen dangerously close to the tips of your knives. If anything, gaming hardware represented the relatively sensible side of the show, with no-nonsense AMD and Intel CPUs launching alongside the least expensive RTX 40 series graphics card yet.

Then again, there were also some mahoosive monitors and a 3D printing initiative by HyperX that could, if you’re so inclined, replace all the keys on your gaming keyboard with miniature ducks. Classic CES moves. Here’s my picks of the show:

To the least amount of surprise a human body can produce, Nvidia used CES to launch the GeForce RTX 4070 Ti desktop GPU. This is the third RTX 40 series card to go on sale, following last year’s RTX 4090 swear RTX 4080and (as expected) is a rebrand of the weaker 12GB RTX 4080 variant that Nvidia canceled shortly after revealing it. It arrives with a lower price of £799 / $799, down from the original proposal of £949 / $899, with specs like the 12GB of GDDR6X memory and 2.61GHz boost clock speed remaining unchanged.

I’ve been grumpy about the RTX 4070 Ti’s bigger brothers, mainly because while they do make big upgrades to the RTX 30 series, they’re priced as if Nvidia suddenly decided to become some kind of aspirational tech brand where the exclusivity is the point . The RTX 4070 Ti is far from cheap but at least it’s more in line with the higher-end pricing of previous generations, and if Nvidia aren’t exaggerating when they say it can outperform the RTX 3090 Ti, it has the best chance of the current range to be a GPU that’s actually worth buying. It’s out now, and I should have a review ready next week.

RTX 40 series laptops are on the way too, with a range of GPUs that actually expands on the trio of desktop offerings. Nvidia announced mobile graphics chips bearing the RTX 4090, RTX 4080, RTX 4070, RTX 4060, and RTX 4050 titles, a notable increase in scope given how desktop versions of the RTX 4060 and RTX 4050 have yet to be announced. Laptops bearing these chips, which use the same Ada Lovelace architecture as the desktop models, will go on sale from February 8th.

AMD announced, whew, just bloody loads of kit at CES 2023. Desktop-wise, the highlight was a new three-piece of Ryzen 7000 processors with a similar 3D V-cache design to the Ryzen 7 5800X3D. Releasing from February, the Ryzen 9 7950X3D, Ryzen 9 7900X3D, and Ryzen 7 7800X3D aim to give gaming performance a jolt with significantly fatter L3 cache reserves. As well as boost clock speeds between 5GHz and 5.7GHz, with up to 16 cores and 32 threads on the Ryzen 9 7950X3D. This process of cache engorgement – ​​which allows for more data to be stashed inside the CPU itself, speeding up overall processing time – worked well for the Ryzen 7 5800X3D, so I’ve got high hopes for these new chips as well. Maybe this time AMD will actually lend us one.

Also revealed were three new, ‘standard’ Ryzen 7000 desktop CPUs: the Ryzen 9 7900, Ryzen 7 7700, and Ryzen 5 7600. These feature lower clock speeds than the X-suffixed equivalents that launched last yearbut all three come with lower prices and lower 65W TDP ratings across the board.

Laptops got some love as well, with AMD announcing 18 new mobile Ryzen 7000 CPUs. Where gaming laptops are concerned, it’s the Ryzen 7000 HX line that promises the highest performance, ranging from the six-core/5GHz Ryzen 5 7645HX to the 16-core/5.4GHz Ryzen 9 7945HX. Expect to see these finding their way into laptops from February as well, likely alongside the Radeon RX 7000 mobile GPU series. Which, yep, AMD confirmed at CES too.

Comprised of the RX 7600M XT, RX 7600M, RX 7700S and RX 7600MS, these all pack 8GB of GDDR6 VRAM and sound like they’ll be most comfortable at 1080p resolutions. The more intriguing aspect of this announcement, however, was the teasing of Smart Shift RSR: a new take on Radeon Super Resolution upscaling that “intelligently distributes rendering, upscaling, and presentation demands” between the CPU and GPU to further enhance performance. This will only be available on AMD Advantage branded laptops, ie where the CPU and GPU are both of AMD make.

Not to be outdone, Intel unveiled more than 30 mobile CPUs based on it 13th Gen/Raptor Lake architecture, spanning high-speed gaming models as well as low-wattage chips for fanless ultraportables and mini PCs. The star of these is the Core i9-13980HK, which can boost up to 5.6GHz and stocks no fewer than 24 cores; that’s eight powerful Performance cores and 16 smaller Efficiency cores, as per Raptor Lake’s hybrid design. Intel says this is the world’s fastest laptop CPU, and… yeah? Probably? Look at the damned thing.

Luckily, there will be more affordable alternatives, even within the gaming-focused HX range. The Core i5 contingent alone ranges from the 10-core/4.5GHz Core i5-13450HX to the 14-core /4.9GHz Core i5-13650HX. There’s also the 13th Gen H series, which includes ten chips that still aim for gaming-spec performance while balancing themselves with a less battery-hungry 45W base power rating. The entire HX series is rated at 55W.

I was pretty convinced by Asus’ big-screen OLED gaming monitors when I tried them last year, and CES saw multiple display makers show off OLED screens with more desk-friendly proportions. The Asus ROG Swift PG27AQDM, Acer Predator X45, and LG UltraGear 27GR95QE-B will all launch this year with 27in/1440p panels, and while this screen tech isn’t yet affordable enough to make IPS obsolete – the cheapest of these, the 27GR95QE -B, is priced at $1000 – the move towards reasonable screen sizes hopefully points towards OLED becoming more of a realistic option for gaming monitors in general.

The main benefits of OLED tend to be its natural high contrast and deep, inky blacks, the latter especially being something you can’t truly get with edge-backlit IPS panels. But these monitors are seriously fast as well, with the Predator X45 supposedly getting its gray-to-grey response time down to 0.01ms – and Asus and LG’s rivals aren’t far behind, on 0.03ms. All three can hit a 240Hz refresh rate too, which is about the fastest worth aiming for (as there’s basically no visible difference between this and, say, 360Hz).

The 57in Samsung Odyssey Neo G9

Oh! You could wave away all that ‘reasonable size’ talk and get a curved 57in mini LED monitor. This new version of the Samsung Odyssey Neo G9 (or the G95NC, for short) is a hilariously stretched-out screen that, with a resolution of 7,680×2,160, is equivalent to two 4K gaming monitors glued together.

Samsung have, rather wishfully, specced the G95NC with a 240Hz refresh rate, and although the 32:9 aspect ratio is natively supported in hundreds of games, there isn’t a graphics card in existence that will run most of them anywhere near 240fps this resolution. Still, it’s… in keeping with the spirit of the show?

Regular RPS VRsman Rick Lane reckons 2023 will be a far more exciting year for virtual reality than 2022. The newly revealed Vive XR Elite may have a part to play in that: although it’s partially concerned with metaverse nonsense, it does appear to retain more of a games focus than the recent Meta Quest Pro. It’s both more compact and higher-res than the Vive Cosmos Elite, with two 1920×1920 displays inside a headset that more closely resembles a pair of chunky welding goggles than the blocky faceplates of yesteryear. I’ll leave it up to your tastes whether that looks more or less silly.

The catch is that a £1299 / $1099 price makes it even dearer than the Valve Index. That said, the XR Elite does have built-in hand tracking, and is at least not quite as expensive as the Quest Pro. It’s an audacious move to go back towards high-end VR at a time when interest in the tech is waning, but as Rick has pointed out, there are some interesting VR-only games coming out this year; the XR Elite could be a fitting way to play them, if performance is up to snuff.

Besides wired and wireless versions of the Pulsefire Haste 2, a successor to one of the best lightweight gaming mice, HyperX made one of the more unexpected CES 2023 announcements. HX3D is a service/storefront, launching later in January, that will sell 3D-printed accessories for compatible PC peripherals.

Keycaps will be a big focus, with lil’ rubber ducks and suchcarf-snuggled cat being among the first revealed trinkets. They look pretty well made, having been spun out of high-end printers by HyperX parent company HP, and should clip onto most mechanical ‘boards even if it’s not a HyperX model. Other accessories, like what looks to be a microphone mount of writhing Kraken tentacles, might only fit the brand’s own.

Thus spoke the press release: “HyperX will collaborate with game developers, esports teams, content creators, influencers, and internal creative teams to create and design fan-friendly products that can be used while gaming or collected as keepsakes or cherished collectibles.” I’ll admit that this is not my thing – I like my keycaps to feel like keycaps, not the plasticky hat of a figurine – though again, there is some decent craftsmanship. Printsmanship?