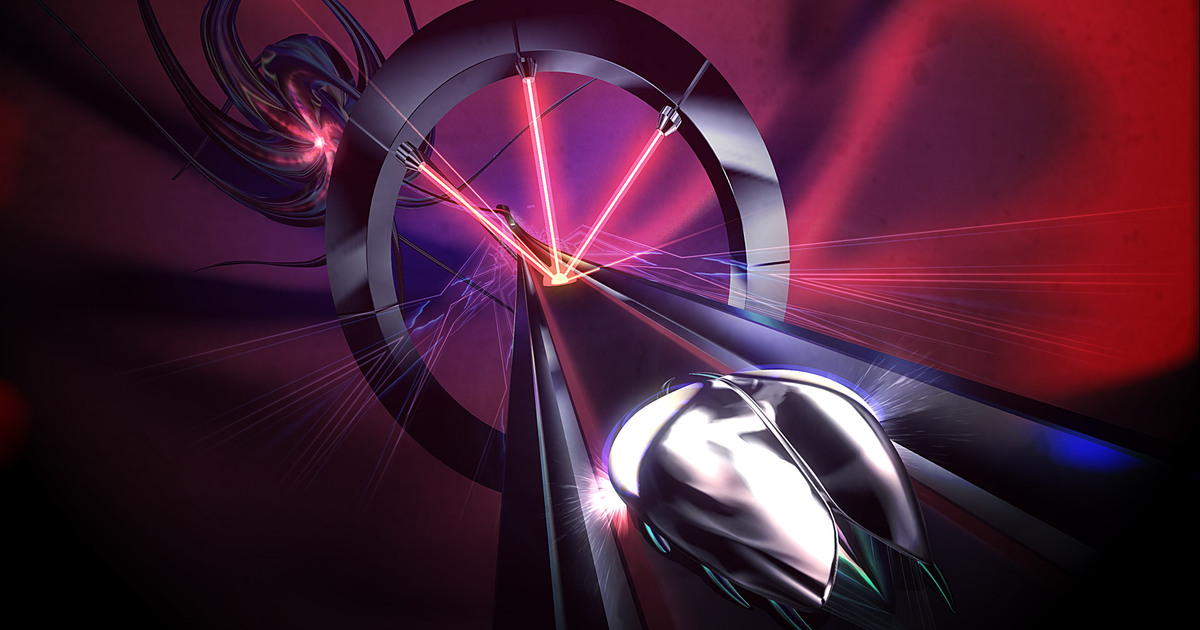 I’m a fan of a rhythm game. Something where you can go into a flow state, you know? They can be perfect when you’ve had a long day and don’t want to engage your brain. The thing is, I don’t think Thumper is one of those games. Thumper is some kind of sci-fi nightmare in space, and it moves so fast that you can’t relax for a second.

It does fulfill the “rhythm” part of that brief, though, with a pulsing and tooth-jarring soundtrack by noise-rock musician Brian Gibson. And you can time your grinds and jumps and turns to the thumping beat under everything. But it’s very hard, and you are quite small.

You’re a space beetle, streamlined and aerodynamic, and with an incredibly shiny shell that reflects the lightshows in the hellish void that you’re speeding through. You race along a seemingly endless rail, into strange tunnels of light and sound, repeating fractals, angry walls spouting from a suddenly cylindrical track. It’s like being trapped inside a kaleidoscope designed by MC Escher after he spent a heavy weekend at Bestival. It even has boss fights, somehow, and the bosses are eg giant heads that have become inseparable in my mind from that boss fight at the end of Mass Effect 2.

You’re not totally defenseless. You can strafe into corners, sort of hunker down to speed up, and attack by flipping up the wing bits on your shell – though this will slow you down a bit. All of this has to be timed exactly to the hazards on the track as they appear, and given that the later levels have the visual noise of a hall of mirrors that’s had every pane of glass shattered with a jackhammer, Thumper requires the kind of pinpoint concentration that you can only achieve if you’re not trying too hard. It’s both an impressive and weird game, and if you play it, you can immediately see why reviewers use terms like “existential dread” to describe it.