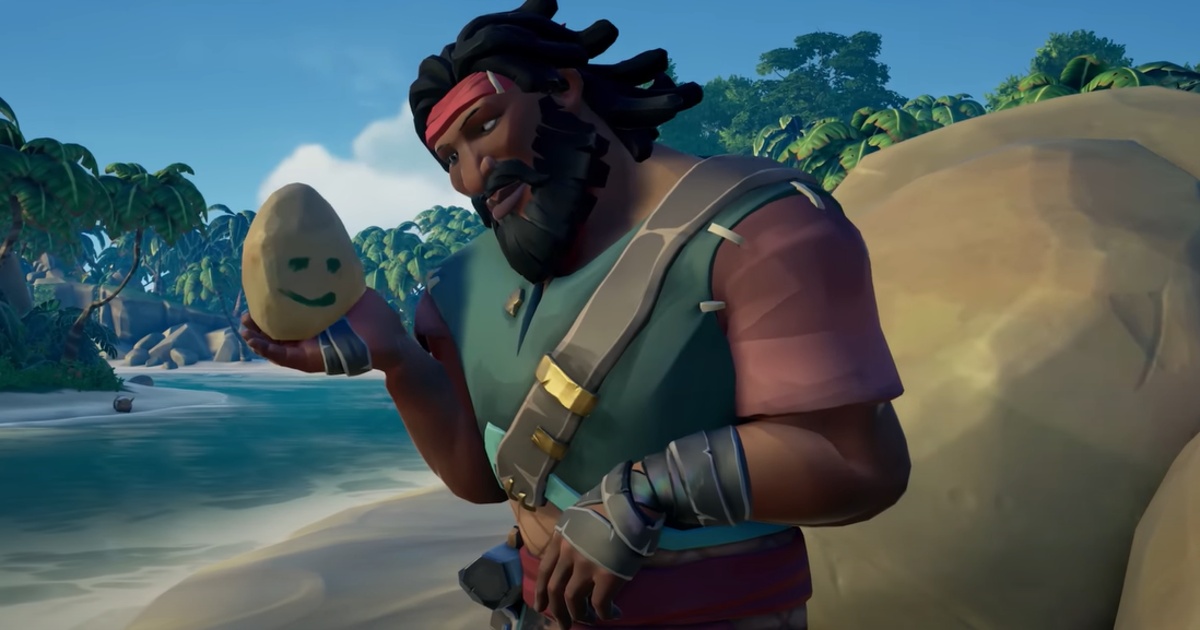 Sea Of Thieves is getting a mid-season update today, bringing the chance to catch up on all the pirate gossip with a trusty pet rock pal. The pocket pebble is only an emote that you can buy from the Sea Of Thieves store, but the company might help you keep it together on the long, lonely journeys across the game’s seas. The update also introduces a new time-limited event, The Secret Wilds, and some matchmaking improvements for PvP. Watch the video below for more on what’s coming in the latest Sea Of Thieves update.

I’m very enamored with the pocket pebble, as Rare are calling what is very obviously a pet rock. It even has a little smiley face scribbled on it, presumably to cheer you up if your ship’s sunk. The pocket pebble doesn’t quite have the abilities some of Sea Of Thieves’ actual pets do, so it won’t hop around after you as you navigate the game’s roiling waves, but it’s oddly cute. I like to think of it as an old-school, pirate Tamagotchi.

The launch date for Season 10 of Sea Of Thieves is still bobbing away out there in the ocean somewhere, but for now there’s the eleventh time-limited event to play through. The Secret Wilds runs from January 19th until February 2nd, and tasks you with helping pub landlord Tasha cure herself of an unfortunate skeletal curse. You can check out more about The Secret Wilds event here.

Anyone who’s been delving into Sea Of Thieve’s PvP since Season 8 kicked off in November will be pleased to hear there’s some much needed improvements to speed up matchmaking coming in this update too, along with more compensation when you’ve sunk after losing a battle or straying out of bounds. We rated Sea Of Thieves among our list of the 25 best multiplayer games to play on PC recently, thanks to the game’s lovely sailing and intense battles.

You can plunder from Sea Of Thieves Steam and the Microsoft Store for £35/$40/€40. It’s also on Xbox consoles, and included in Game Pass subscriptions. You can read more about today’s update in the release notes here.